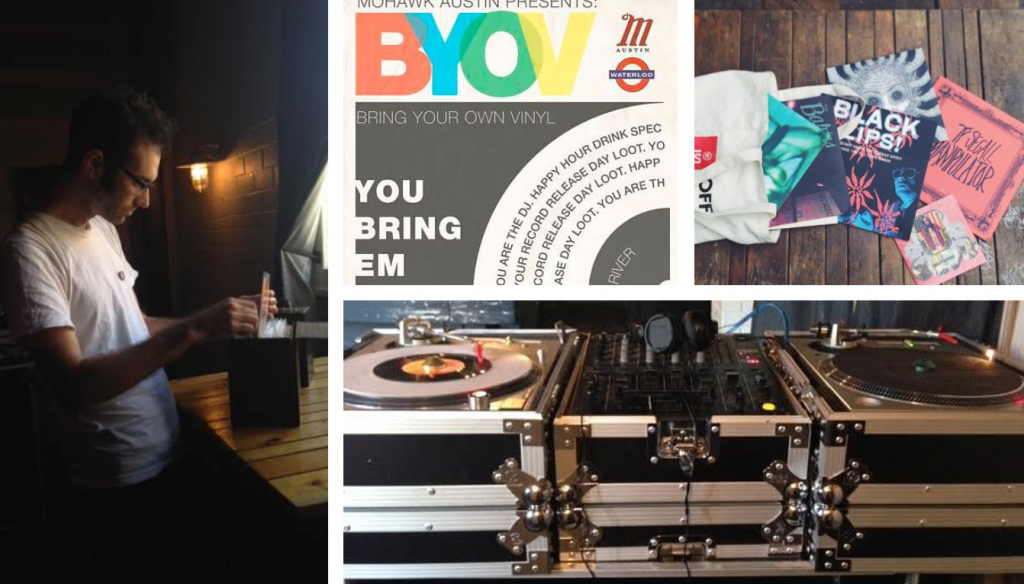 No, that’s not a misspelling or auto-correct inaccuracy. BYOV stands for Bring Your Own Vinyl. While this unique night has a long-standing presence at a couple of well-known local bars, BYOV nights are showing up in other venues across Austin.

END_OF_DOCUMENT_TOKEN_TO_BE_REPLACED Not having grown up in Texas, one of the things I enjoyed most when I first moved to Austin was listening to live music and watching all the cute couples on the dance floor, having a blast two-stepping.   At first, I didn’t know what type of dancing I was looking at, but I quickly decided I wanted to twirl around in a southern gentlemen’s arms wearing a sundress and boots.

You may have a secret desire to get out there yourself, but you’re concerned about not knowing what the heck you’re doing. No worries, I’m going to share with you where to take your two left feet for an awesome class with some of the best teachers in Austin. Our city has no shortage of amazing and truly historic joints to head to when you want to show off your new skills.

Here are three of my favorites. END_OF_DOCUMENT_TOKEN_TO_BE_REPLACED Unlike every other good thing discovered in Austin, I first learned about Antone’s in Mopac traffic. I was crawling north towards Route 183 when a ’70s-era van edged in front of me. On its back were hundreds of stickers. Stubb’s. Saxon Pub. Austin Beerworks. As a recently re-located East Coaster, I was still learning the language. But one of them stuck out: Antone’s. With a personal name and classic-looking logo, it looked like my kind of place.

From there, Antone’s was a folktale. Everywhere I looked, I saw references to a legendary blues venue closed only months earlier. Whispery rumors through faded bumper stickers and the weathered remnants of show posters pasted to bar bathroom walls. Whenever I mentioned it to locals, most would sigh and say, “I miss that place.” END_OF_DOCUMENT_TOKEN_TO_BE_REPLACED There are actually quite a few wonderful businesses on Dirty Sixth that aren’t as “dirty” as you might imagine. END_OF_DOCUMENT_TOKEN_TO_BE_REPLACED For 90% of the world, there’s only one Man in Black. Forget the Will Smith movies; ignore the X-Files. Johnny Cash, one of country music’s original rebels, is the only one who matters.

While you can trek to Nashville to pay homage, there’s a joint right here in Austin that honors the legend through its décor, drinks and demeanor. With more than just a novelty name for a dive bar, Mean Eyed Cat Bar hides quality cocktails, great food and exceptional service behind its roughneck exterior. The result is your new favorite local hangout. END_OF_DOCUMENT_TOKEN_TO_BE_REPLACED Cap City Comedy Club is my favorite place in town. That’s saying a lot, considering the number of businesses and establishments I’ve written about during my time with The Austinot. But I said it and I stand by it. END_OF_DOCUMENT_TOKEN_TO_BE_REPLACED There has been a notable upswing in storytelling events in Austin. And while many of these events are formal, paid affairs, there’s a movement to make them accessible to the average Austinite.

Backyard Story Night is part of this movement. The goal is simple: gather friends – and friends of friends – in a backyard to share real, unrehearsed stories.

So whether you’re a storyteller or love to hear a good story, here’s the Who, What, When, Where, Why and How of Backyard Story Night in Austin. END_OF_DOCUMENT_TOKEN_TO_BE_REPLACED Headed to The New Movement on Lavaca

In a basement off Lavaca sits The New Movement comedy theater and conservatory. Originally located east on Rosewood, The New Movement was started by comedians Chris Trew and Tami Nelson in 2009. Since then, their success has led to a second location in New Orleans.

The New Movement has created a kingdom of comedy where patrons can catch improv, sketch and stand-up shows produced by talented and driven comedians.

Getting to Know the Shows at The New Movement

There is a lot of ground to cover when introducing anyone to The New Movement because of the huge variety of shows taking place onstage from Wednesday through Sunday every week. END_OF_DOCUMENT_TOKEN_TO_BE_REPLACED It almost sounds too good to be true. Legal gambling in Austin? Short of a four hour drive to Kickapoo Lucky Eagle Casino in Eagle Pass, it simply didn’t exist before now. Texas Card House has changed all that, offering the first legal poker room in Austin–and in the whole state of Texas outside reservations.

The trick is in the language. Texas Card House offers membership to a “card and social club” and provides a facility where members can gamble. END_OF_DOCUMENT_TOKEN_TO_BE_REPLACED

The intersection of 183 and Burnet Road forms the epicenter of a half mile bubble of retro joy. If you were old enough to ride a bicycle in the 1980’s, this list of places to have fun in Austin should tickle the nostalgia center of your brain. Now you can roller skate, sing karaoke, bowl and visit an old school arcade without driving all over town.