No, that’s not a misspelling or auto-correct inaccuracy. BYOV stands for Bring Your Own Vinyl. While this unique night has a long-standing presence at a couple of well-known local bars, BYOV nights are showing up in other venues across Austin.

What Is BYOV Night?

BYOVs are the perfect time for you to show off your record collection and play songs from your favorite 45s or LPs. You can find regularly occurring BYOV nights at Rio Rita and Mohawk. These two are the longest-standing nights and have the largest presence in Austin’s BYOV scene.

Mohawk kicks off happy hour at 5 p.m. with BYOV on Tuesdays. Depending on the week and whether there’s a show booked or not, the event can last all night. People usually filter in throughout the night to either play their collections or listen to others’. When it started, BYOV nights were conveniently scheduled on Tuesday, so people could play their new acquisitions, as Tuesday has historically been “New Release Day” at record stores nationwide. Nowadays, Fridays are “New Release Day,” but Mohawk staked its claim for every Tuesday night. 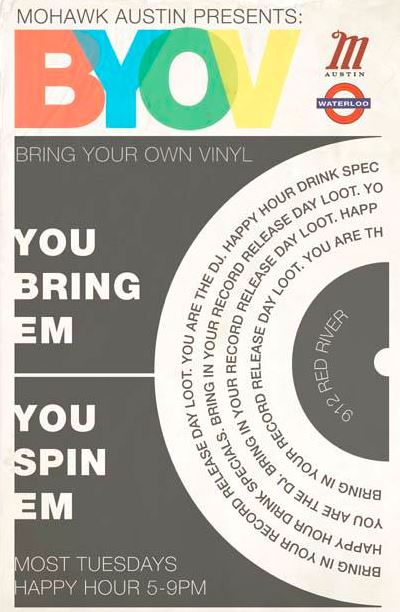 How many songs, sides or time to play? I asked. The Mohawk employee exclaimed, “No rules. It’s anarchy!” Of course, he was being facetious, but one regular explained it to me as “really chill.” Indeed, it was a “chill” night.

What’s cool about Bring Your Own Vinyl is you can be your own DJ and not have any pressure to please a crowd. Any judgment is left at the door. In fact, these nights are a great time to practice your DJ skills and get a feel for being behind the turntables. Some regulars have utilized these nights as a practice ground before getting regular DJ gigs, perhaps even ones that pay. Although, it seems like most people just do it for fun.

Bring Your Own Vinyl Insider Tips Are you ready to show off your spinning skills?

Naturally, BYOV nights are driven by love of music. During the happy hour I attended, I heard the Ramones, David Bowie, Elvis Costello, the Misfits and the theme song from Sigmund and the Sea Monsters. At a Rio Rita BYOV, I heard classic country, indie rock and funk. You can also hear a good mix of hip-hop, international music, Motown…the list goes on.

The music changes every week depending on the DJ’s taste and collection. So even if you don’t want to play any records, BYOV is still a good night for music lovers. It’s a place where you can learn about new and old artists, listen to some rare finds, learn to love a new genre of music and just nerd out on vinyl.

In a short conversation with a BYOV regular at Mohawk, we found out we had mutual friends simply from attending BYOV nights. Attesting to the “chill” atmosphere, he said, “I have about four or five friends I consider my ‘record friends’ who I met through BYOV nights.”

I also noticed at Rio Rita’s BYOV night, a few DJs sat together as they waited for their shot at the turntable. They talked about their individual taste in music and flipped through each other’s records, complimenting each other on certain vinyl and learning about others.

BYOV Nights Are Open to All 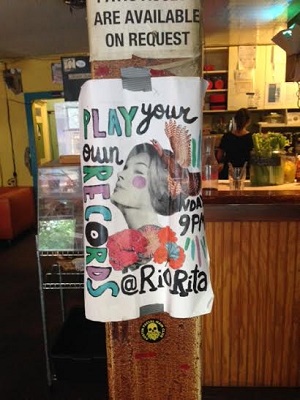 Check out Rio Rita’s BYOV every Monday at 9 p.m.

Whether you’re an aspiring DJ, avid record collector or just in it for the fun, you can find BYOV nights at several different bars around Austin. Rio Rita and Jackalope host one every Monday starting at 9 p.m. Mohawk’s is every Tuesday starting at 5 p.m. Follow these bars on social media and be on the lookout for pop-up BYOV nights at Dog and Duck, Highball, The Wheel, ABGB, Spider House and Yellow Jacket Social Club.

While Mohawk may have “no rules,” other BYOV nights may have rules, such as number of songs you can play or time you can play. Check the rules before you go.

Do you know of any other BYOV nights in and around Austin?

Alicia Santiago is a nonprofit professional for work and a record store clerk for fun. You can follow her on Twitter here.

Thank you for this article.
I’m a huge fan of BYOV Nights here in Chicago.
I may need to pay a visit to ATX soon.