I have a special appreciation for local businesses that go out of their way to erect sculptural somethings to entice me. This includes eight-foot-tall gorillas. And 10-foot-long, fully-loaded sandwiches. And hippie church gospel taco queens, like Maria.

Here we have the O.G. ThunderCloud sub. If only we could make this 10-foot-long, 40-year-old monster sandwich edible. Setting the standard for community outreach, ThunderCloud Subs sponsors Turkey Trot, an Austin tradition since 1991. The annual run has raised over three million dollars for Caritas, a local nonprofit helping those experiencing poverty and homeless. 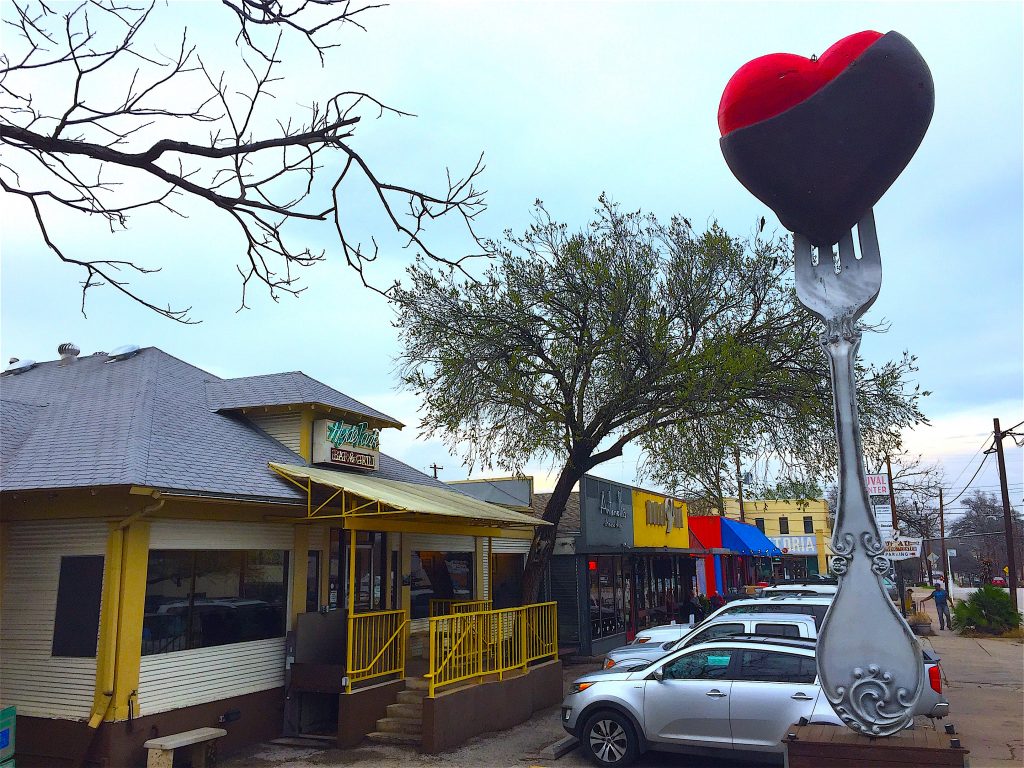 Hyde Park Bar & Grill adorns its fork throughout the year

This 25-foot-tall fork has been skewering seasonally-appropriate food items since 1982. Its current ornament is a chocolate-covered heart, surely a creative homage to the season of love and Black History Month. Fun fact: Hyde Park Bar & Grill, known to me for their delicious chicken guacamole BLT, also has one of the best holiday lighting displays in all of Austin. The Chiquita banana zebra dancing mid-twirl above Lucy in Disguise with Diamonds on South Congress is, to its core, Weird. Costume-oriented “Lucy in Disguise with Diamonds” and vintage clothing-oriented “Electric Ladyland” opened adjacent doors on April Fool’s Day 1984. (Or did they?) In the nearly 34 years since, the two have merged and grown to become the eccentric, floor-to-ceiling 8,000-square-foot costume emporium at the heart of the South Congress we all love. This rotating beacon is calling you to tacos

As if its secret menu wasn’t enough, Torchy’s Tacos went ahead and made the most mechanically-advanced sign in all of Austin. The spinning icon at the Mueller location has been rotating without fail since November 2014. The intense under-lighting and flaming red paint make it one of the most eye-catching decorations in all of Austin. It’s a damn good sign to go with some damn good tacos. The Big Red Boot perches one hundred feet south of Lucy in Disguise on South Congress. This iconic piece of footwear has ornamented the Allens Boots marquee since 1977, attracting visitors from all over the country. Check out the Wall of Fame inside, where celebrities of every walk have left their photographs. Across the street from the Big Red Boot is the Big Pink Cupcake. Hey Cupcake! opened its food truck window in 2007, and hasn’t looked back since. The sprinkles have spread, along with rumors of deliciousness. Now in three popular locations and known for silver bullet wagons, Hey Cupcake! is the local treat of Austin. For 21 years, Maria has welcomed the local community to share in the good vibes of her eccentric eatery. Maria’s Taco Xpress hosts such events as boogie bingo and Hippie Church. If you’re wondering what those are, then I recommend you simply go for the experience. Maria’s serves fresh mimosas. South of the river kneels a massive Peter Pan. The sculpture of Peter was completed in 1977 by a relative of the business owner, Glenn Dismukes. The Lost Boys don’t drink, but this one does! Peter Pan Mini Golf is a hot spot for friends and family, looking for a fun BYOB get-together.

Pew pew! A single game at Blazer Tag can accommodate up to 57 people at once (the largest laser tag area in the entire state). The sign outside is a sprawling, two-story battle scene, consisting of a downed alien cruiser and several ray gun-slinging figures. Blazer Tag’s panorama has grown significantly in the past few years, an effort which has secured Blazer Tag’s position as the business with the largest weird sign. With no sign of stopping, who knows how big it will become.

The eight-foot JuiceLand gorilla has been sitting on his knuckles and butt cheeks, all day every day, selling really good smoothies, since 2011. Out of the 26 JuiceLand locations, there are apparently just three gorillas: triplets. One is located on Barton Spring Road and another on Lake Austin Boulevard. The third is as yet undiscovered. If you find her, please let me know.

The Light Bulb Guy is never not having a Eureka moment. As a customer with issues that need solving, I’m looking for exactly that kind of consistency. Located on Burnet Road for over 30 years, and run by a gentleman who’s been in the light bulb business for 50, The Light Bulb Shop is a shining example of a thriving local business.

These sculptures and statues, many of which are over 30 and 40 years old, are a testament to the Austin we love: locally-owned and proudly weird.

Jackson Prince minored in English in college and is working hard to prove its worth. He works in film, but, more importantly, he is undefeated at laser tag. 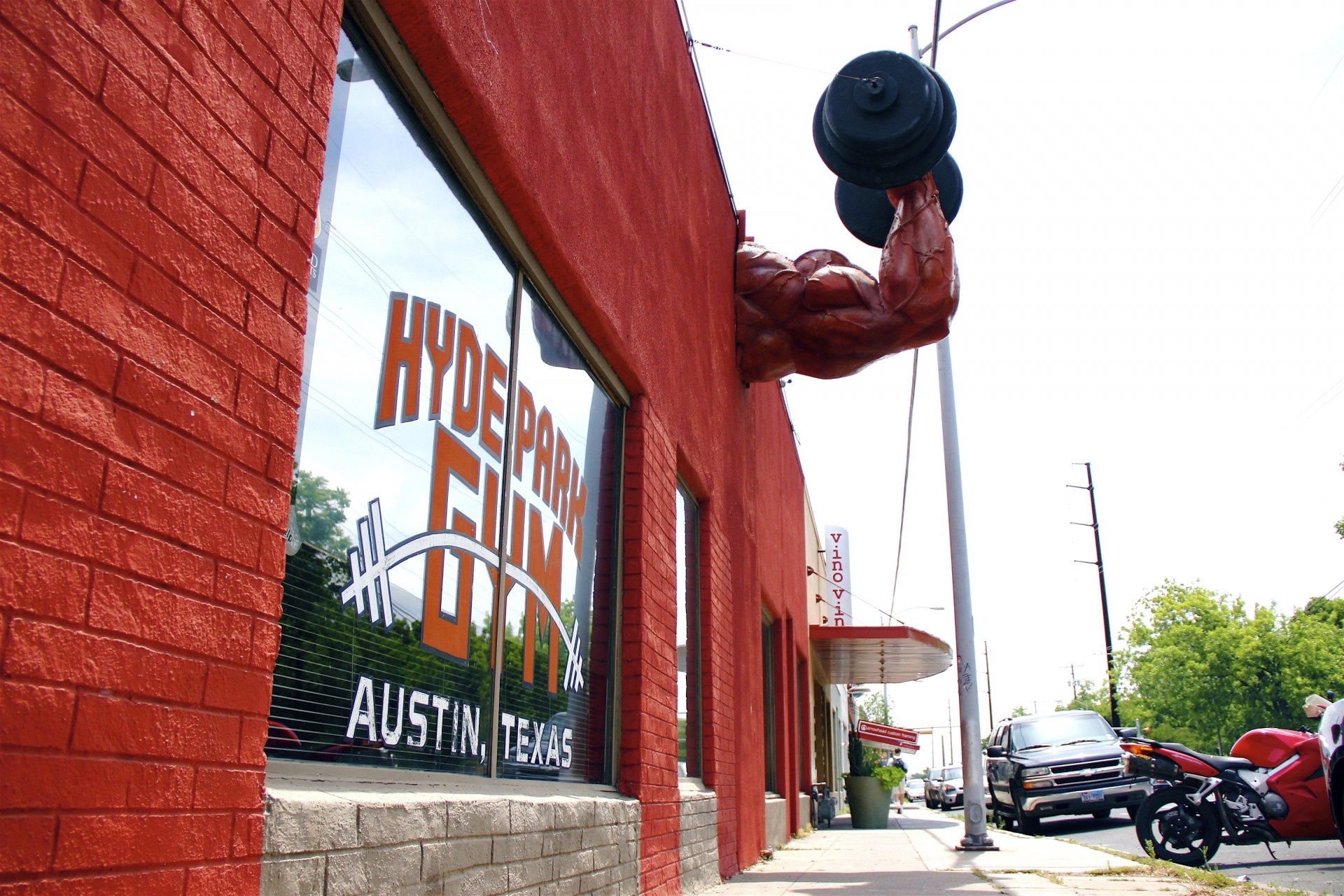