When my husband and I started The Austinot in our living room at the end of 2011, we had no idea what it would become. The last thing I expected is that I’d be celebrating 1,000 articles after three and a half years, written by an extraordinary collection of volunteer Austinites who caught our vision.

Our vision took time to develop. Like I said, I had no idea what The Austinot would become. Despite our online marketing background, The Austinot started out as more of a personal hobby blog. We published silly articles we never would now, like this one. Even the name of our blog was chosen on a whim, using an online name generator called Wordoid. Yes, Austinot is a play on “astronaut” because we’re exploring the city. But then, why didn’t we spell it Austinaut? (Answer: because END_OF_DOCUMENT_TOKEN_TO_BE_REPLACED 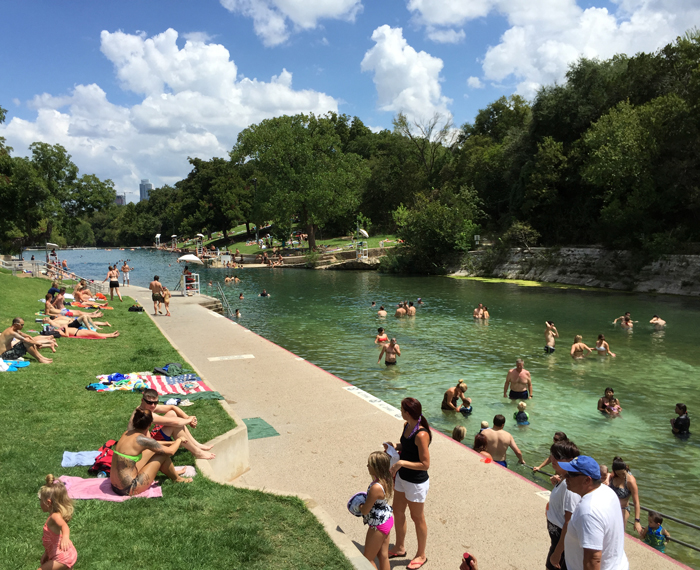 I wanted to compile a short guide on what makes Barton Springs Pool quintessentially Austin. In order to scratch the surface of this historical gem, I met with Wayne Simmons, Aquatic Program Manager for the City of Austin, and Clark Hancock, Exhibit Coordinator at the Nature & Science Center. END_OF_DOCUMENT_TOKEN_TO_BE_REPLACED When you see a gentlemen biking through Austin in a beige colored g-string and you don’t do a double take, is when you know you’re a true Austinite. In Austin, we see some crazy things: dogs being pushed in baby strollers, hipster beards for days, festivals for everything and endless tacos. So many tacos….

In the spirit of “a picture’s worth a thousand words,” check out these posts from Twitter and Instagram, all of which sum up Austin beautifully.

END_OF_DOCUMENT_TOKEN_TO_BE_REPLACED

It’s a sleepy Saturday morning during South by Southwest and the city of Austin is not fully awake yet. The sun is minutes away from making its debut when I meet Christopher Sherman, of Over Austin fame, just south of the river next to the Zach Theatre. We have a perfect vantage point to do a little flying and capture beautiful panoramas of the downtown Austin skyline. END_OF_DOCUMENT_TOKEN_TO_BE_REPLACED The year is 1960 and Senator John Fitzgerald Kennedy is on the campaign trail with a charismatic senator from Texas, Lyndon Baines Johnson. The threat of nuclear war is ever present with families around the country building fall out shelters. The small city of Austin, Texas with a population of 186,545 takes the looming threat seriously as well. If a nuclear bomb were to fall on Austin, would residents be prepared? END_OF_DOCUMENT_TOKEN_TO_BE_REPLACED

As the new year begins, we’re taking a moment to look back on 2014 and celebrate the articles our community loved most. Walk with us down memory lane as we present Austinot.com’s 10 most popular articles of 2014. You’ll enjoy our list best with a local snack in your hand, and we have just the thing you need. We rounded up the best 7 grilled cheese sandwiches in Austin, from greasy spoon joints to END_OF_DOCUMENT_TOKEN_TO_BE_REPLACED

I miss you when you're not here, I said. My words failed to penetrate as you continued to gaze deep into the small screen in your hand.

Five years and nearly 200,000 Twitter followers ago, Sean Hill created a Twitter account. He wanted to test out some of his improv skills in a burgeoning format, so @VeryShortStory was born.

At first, Sean tried to craft longer stories with other Twitter users writing back and forth, but it never quite flowed right. “So I started asking my followers to suggest a noun and I kept all of them in a file. I had a batch of nouns ready for whenever inspiration struck,” Sean Hill told me. Two or three nouns were more than sufficient to create a story within 140 characters that left a lasting impression. This was still the early days of Twitter, when a simple and elegant idea was enough to grow a massive following.

END_OF_DOCUMENT_TOKEN_TO_BE_REPLACED

200 feet above Rainey Street, the traffic on I-35 doesn’t seem quite as bad. Almost tranquil even. I am following one of Austin’s most daring rooftop photographers as he makes his way across the roof of a Rainey Street highrise. This image was captured solo using a tripod with a 15 second exposure. On the unfinished JW Marriott looking westward.

END_OF_DOCUMENT_TOKEN_TO_BE_REPLACED If you’ve ever wondered who is behind the brightly colored mystery mobile, you’re about to get an Austinot insider scoop. END_OF_DOCUMENT_TOKEN_TO_BE_REPLACED

What happens when a normal citizen becomes fed up with a city’s lack of action in response to a city-wide crisis? Over 3,500 signatures and more than 42 pages of testimonials from frustrated Austinites get collected, demanding action.

Sara Levine founded ATX Safer Streets after she received an overwhelming response to her petition calling for action. In less than two months, with the help of Butch Dowdy, Joseph Doyle, and several other volunteers, Sara has made considerable progress.