One of Sam Olivo’s favorite stops is the Capitol, where he can always find a few folks to serenade.

To know Sam is to love Sam. You know that guy who rides his horse in downtown Austin? That’s Sam Olivo, the 6th Street Cowboy.

If you saw Olivo riding on a horse alongside someone else at the recent Texas Book Festival, that someone else was me. He was kind enough to let me tag along on a peaceful jaunt down Congress Avenue, as he told me his story and sang a few songs.

Our journey had us trotting through downtown Austin, and culminated with an intensely personal Native American ceremony at a sweat lodge. Along the way, Olivo told me about his second shot at life, why he rides his animals downtown and what his mission in life is now.

Olivo’s story is an important one. It’s the story of a man with an old world mentality, living in a city growing at a breakneck pace and struggling to maintain its identity. Olivo refuses to change, in a city that’s constantly changing.

A Second Chance at Austin “Tex here is actually the white horse from The White Horse over on the eastside.”

“I want to bring happiness back to this city that is growing into a corporate world,” Olivo said.“Change is inevitable, but Austin used to be a very free city. So I’ll always just keep riding my horse.” The story began as we left on horse and mule from Jo’s Coffee and headed north on South Congress.

Olivo’s second act began as he celebrated the accomplishments of his first. In January 2011, he was riding down 6th Street after enjoying a few drinks, to celebrate his acceptance into a surgical tech program. After an encounter with the Austin Police Department, he was arrested for “Driving While Intoxicated.” The charge was ultimately dropped because, well, Olivo wasn’t driving a motorized vehicle.

Instead, he was riding Texas, his horse of many years, and so began the legend of the 6th Street Cowboy. This story almost never happened, though. During the summer of 2010, Olivo was attempting to break in a horse and was involved in a serious accident. He suffered severe head trauma, collapsed lungs and ended up in a coma that lasted three weeks.

Upon waking, he was told there was a good chance he’d never walk again. Having worked with horses all his life, this wasn’t an option Olivo was willing to accept. After several months of intense rehabilitation, he was walking and riding again. He attributes this fact to the therapeutic qualities of working with horses.

With two life-changing events within seven months, Olivo decided it was time to take stock of his life and make some changes. “I went to visit friends in Sun Dance, Neb. and decided to go on a vision quest,” Olivo shared. The quest would end up changing the course of his life, shortly after he discovered his love for music and performing. “I’m not keeping Austin weird, I’m keeping it for real. There is nothing weird about riding a horse in Texas,” Olivo shared with me as cars politely drove around us. Riding up Congress and around downtown on a mule, with Olivo next to me on a horse, was a surreal experience. Every few minutes, folks would yell, “Hey, Sam!” while we trotted by. Fittingly, Olivo would greet every single one of them with a warm smile and a soft handshake.

“This is why I do it, why I ride my horses downtown. To see the smiles on those kids’ faces. They are naturally drawn to the horses,” Sam said. That became apparent as soon as we got to Texas Book Festival near the Capitol, where we were immediately surrounded by at least a dozen people wanting to meet Olivo and his horse, Tex.

We stuck out like a sore thumb everywhere we rode, but Olivo was the obvious star of the show. Everyone was curious who he was and why he was riding his horse downtown. He happily retold his 6th Street Cowboy story to everyone who asked.

When I asked Olivo how he got started riding Tex (and Big Red, his other horse) downtown, he plainly stated, “I didn’t drive because I didn’t have a license, but I didn’t want to just sit at home. The horses needed to be taken out anyways, so I just started taking them farther and farther out, eventually making it downtown.”

​The 6th Street Cowboy became a local fixture by making regular appearances around Austin and being affable​. He was a regular around local watering holes, despite giving up alcohol. “I just like to hear good live music and meet new people.”

Olivo was eventually asked by a friend to fill in at music gigs. Shortly thereafter, he got paired up with songwriter and music instructor, AlanRoy Wilhite, and grew his repertoire of original songs and covers to almost 50. 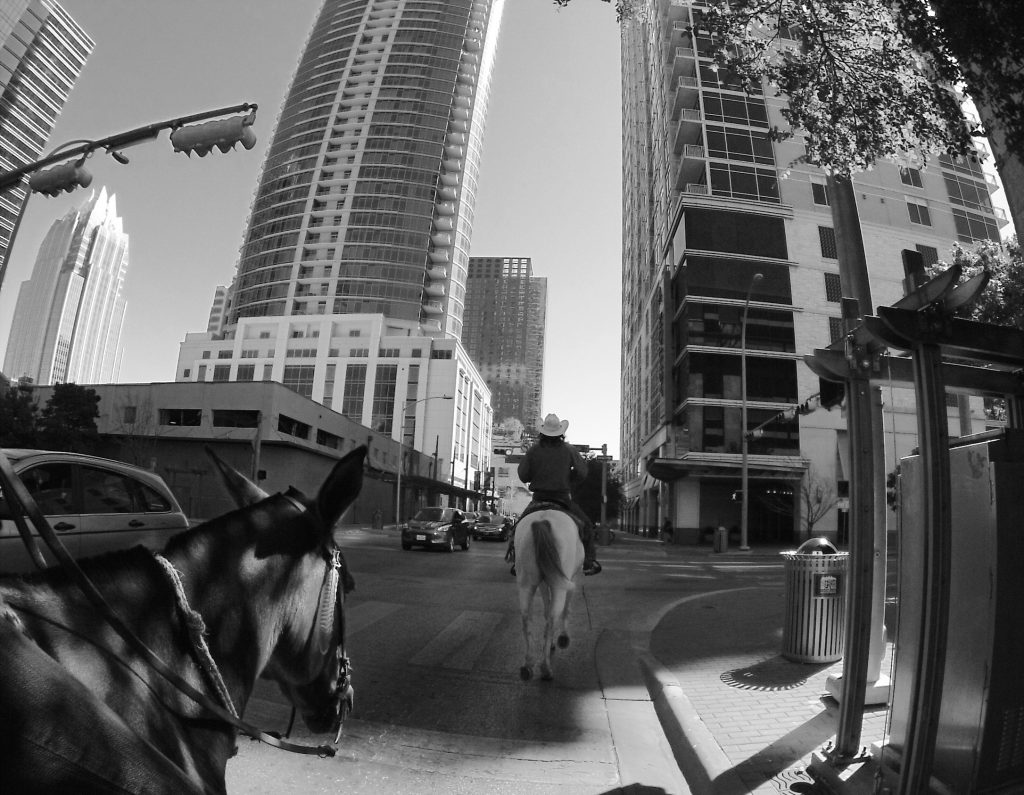 Olivo is set to release his first album within the next few months. During our ride, he indulged me with an impromptu performance of a song on his upcoming album,“Arrested in Horseback,” the story of how the 6th Street Cowboy came to be. You can see Olivo and his full band play every Saturday night in November at one of his favorite stops, Cenote.

“I’m a horseman, not a cowboy. That’s the name everyone else gave me,” Olivo told me as we were finishing up our ride. Given the historical context of the “Cowboys & Indians” culture, I can understand why he makes the distinction. That’s Olivo for you, a man unflinching in his self-identity, trying to maintain his sense of normalcy in a city that is anything but.

Learn more about Sam Olivo and listen to his music on his website.

Have you ever seen Sam Olivo riding his horse through Austin?