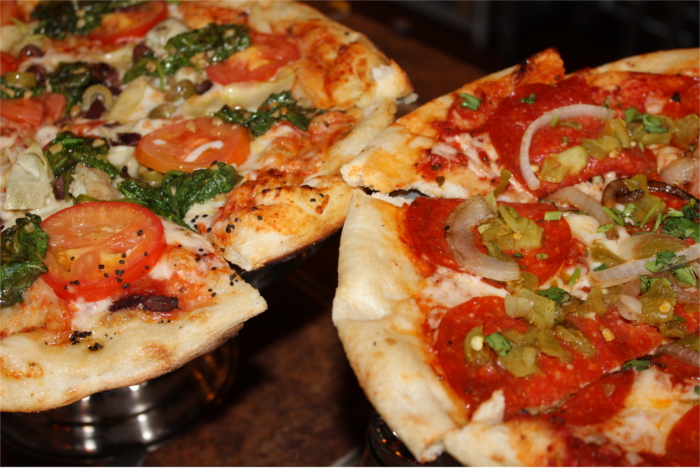 This past May, Warpath Pints and Pizza opened its doors to the residents of Round Rock, putting specialty pizza on the map in the area. Brothers and New Mexico natives, Joel and Jason Chenoweth, were involved in the music and food truck scenes in Austin for years, before seizing the opportunity to create a gourmet pizza joint just north of Austin.

The restaurant’s moniker was inspired by a classic “X-Men” comic book character and the brothers’ personal struggle to get things accomplished in the food industry. Despite it taking six months to open Warpath, the Chenoweths managed to get it done. They combine a ’70s/’80s theme with fresh ingredients to create what they call, “Not the flashiest pizza joint…only the best!”

I visited recently to find out what you can expect from this newcomer. Fried zucchini chips are the perfect appetizer at Warpath

Warpath will fill your cup with an organic soda or craft beer of your choosing from draft fountains. The eatery also offers several canned craft beers from local breweries such as 512 Brewing and Independence Brewing Company.

Upon arrival, I ordered a Liberty Lunch India Pale Ale and scanned the appetizer section of the menu. While it seems every pizza parlor in town is slinging mozzarella sticks and garlic bread for starters, I don’t know of anyone else who is beer-battering sliced zucchini and serving it with ranch dressing. Truth be told,  I can hardly resist anything beer-battered, so I requested the breaded morsels. The savory, golden brown zucchini chips perfectly complemented the hoppiness of my IPA. But they were light enough that I was still interested in enjoying a slice of pie. All pies at Warpath are cooked in a 9,000-pound Bakers Pride Deck Oven. Although the oven runs off gas, it contains three large stones at the bottom, which technically make it a stone oven. The oven’s stones take seven days to cure and cook to perfection what I consider some of the best pies in Williamson County.

After scanning the pizza choices on the menu, I decided to try the Santa Rosa: pepperoni, caramelized onion, red sauce, and chunks of Hatch green chiles. The unique green chile topping caught my eye and intrigued my taste buds.

A clear standout on the menu, this pie, and its unusual toppings, pay homage to the Chenoweths’ southwestern upbringing. “In New Mexico, everything has green chile on it. So I knew I wanted to include it on the menu,” said co-owner Joel Chenoweth.

When the Santa Rosa arrived, I couldn’t have been more pleased with Joel’s decision. The pie was a satisfying blend of savory and spicy, and it was hard to resist a third slice. Instead of having another slice of Hatch goodness, I decided to try a slice of a vegetarian pizza called the Spartan. Warpath prides itself on being vegetarian-friendly, which is much appreciated given the fact that vegetarian options can be a little harder to find on the north end of Austin.

Like the Santa Rosa, the Spartan did not disappoint. Flavorful bites of roasted garlic, sauteed spinach, artichokes, and Roma tomato satisfied my appetite. While it’s abundantly clear Warpath is striving to become the best and hippest pizzeria in Round Rock through quality and service, it’s also clear it wants to be known as the best social hub and hangout spot in the area. In addition to a full bar, craft beer, and hand-tossed pies, Warpath is also home to sporting events and meetups, in collaboration with local organizations. Past events include Game of Thrones viewing parties, Geeks Who Drink, and the Austin Horror Society Meet and Greet Social.

To see upcoming events, check out Warpath’s Facebook page or contact them directly to book your event.

The Only Path Is the Warpath

No matter which trail you blaze to get there, Warpath Pints and Pizza is the ultimate neighborhood destination for craft beer and gourmet pizza in Round Rock, Texas.  So stop in, put some money in the jukebox, and order up one of the 11 unique pies on the menu.

Disclosure: Warpath covered the cost of my meal for the purposes of this review. All opinions are my own.