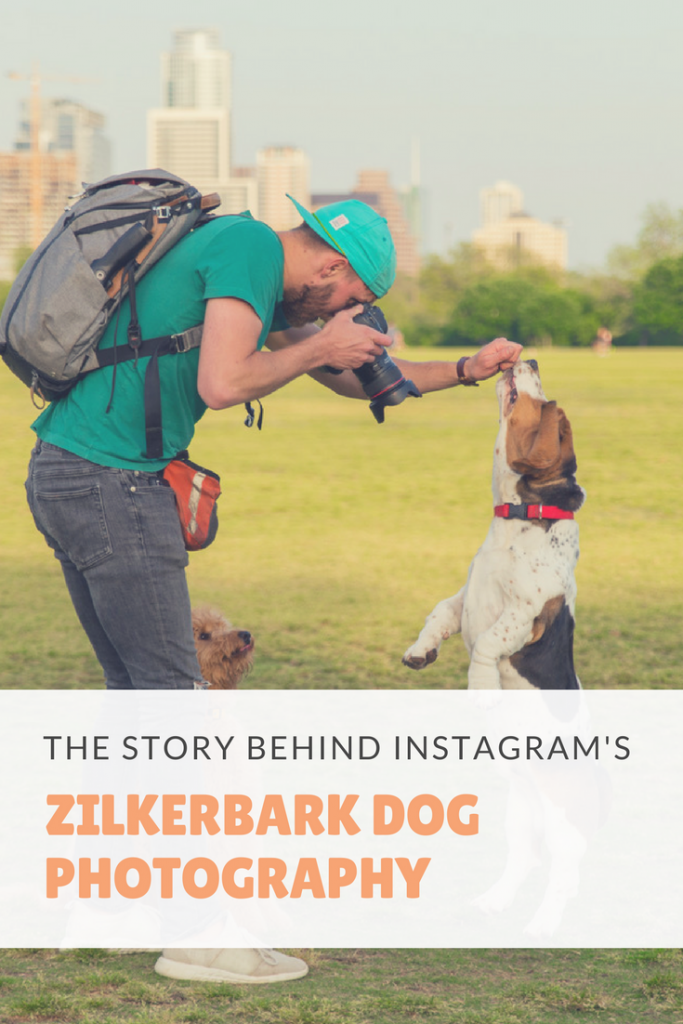 Alex Hopes is living the Austin-American dream. If you’re one of the 138,000 people who follow his Instagram account, ZilkerBark, then you know him as the guy who takes photos of dogs in Austin.

As popular as he’s become in the past few years, the life he has today has only been possible through a lot of hard work. I got to spend an afternoon with Hopes, two of his dogs, and his camera in–where else–Zilker Park.

Here’s a glimpse into how Austin’s most famous dog photographer got to where he is today.

“I Quit My Job and Bought a Camera”

Alex Hopes didn’t have his life planned out, but who does? He moved to Austin in 2012 with his four-legged friend, Sid, and traveled the path of many new arrivals. He served at a popular restaurant downtown, made enough for him and Sid to get by, and indulged in a breakfast burrito at El Primo every once in awhile.

It didn’t take him long to realize this path was not for him. “I felt that I wasn’t pushing myself hard enough. So I quit my job, bought a camera that I couldn’t afford, and started my own thing,” he told me. Alex Hopes with two of his dogs, Sid (left) and Polly (right)

Fast forward a few years, and Hopes was managing social media accounts for local businesses in Austin. He had also started building Sid’s Instagram account, @myregalbeagle. In 2015, he decided to sell all of his belongings, pack up the smaller stuff, and make the move to a new city for another chapter in the life of Alex and Sid. “I literally googled where the most beautiful place on earth was. Split, Croatia, came up. So that’s where we were gonna move.”

Croatia? I’m not kidding, and neither was he. But days after selling most of what he owned, Hopes was faced with a hardship that put all of his plans on hold. He found a seriously injured Sid in the middle of the street, after Sid had wandered off and been hit by a car. When the news was relayed to Sid’s followers on Instagram, they raised nearly $10,000 to help cover multiple surgeries that ended up saving Sid’s life.

This incident led Hopes to rethink his plan to move to Croatia, and strike out on a different kind of adventure instead. This adventure took Hopes and Sid across America in a van, hitting as many national parks as they could.

The Stunning Success of ZilkerBark

Since they returned from their humbling journey, life has been nothing but a steady grind for Alex, Sid, and ZilkerBark.

Sid’s Instagram account has grown alongside ZilkerBark, making this pup quite famous. In the world of Internet dog sensations, that is. His ‘puperoni’ pizza video was the first of many viral Instagram posts involving Sid patiently waiting to devour some food.

This video of Hopes’ dog and a slice of pizza was all it took to boost sales of Hopes’ new children’s book, titled “Sideventures.” The book sold out instantly, and launched the Sid and ZilkerBark accounts on a trajectory to success.

Today, ZilkerBark is the most popular dog-centric Instagram account in Austin. In the past three years, Alex and a couple of the photographers he employs have done more than 1,300 photo sessions with Austin dogs, and their owners. That’s a lot of dog treats!

Hopes has no intentions of slowing down. He has started similar Instagram accounts in cities throughout the United States, which he plans to grow using the same formula he used with ZilkerBark. Two of his newer accounts are @heresapuppy and @cheesmanbark. Although his plans are bigger than Austin, his heart will always be here in his favorite city. Fitting for the guy who spends most of his days in the most loved park in Austin, he spoke about his desire for the preservation of Zilker Park. “This is the one place that I hope never changes. There’s so much change happening all the time here. It would be nice to keep a place like this just how it is.”

He went on to share other local causes that matter to him. “The good thing about having an account like ZilkerBark is that if I need to rally the followers, I can do so for a good cause.” Good causes like Austin Pets Alive!, which Hopes has worked with over the past few years, along with many of the smaller shelters throughout the city. Since his account’s inception, he has raised more than $80,000 to help dogs around the country find homes. I wanted to share Hopes’ story because he is a shining example of someone who came out of college with nothing more than a plan to start fresh. He moved to Austin without a job, a place to live, or even the slightest idea how he was going to make it work. What he did know was how he wanted to measure success in life, and how hard he was willing to work for it.

Six years after taking a shot, he is living a life he can be proud of. Today, one of his biggest worries is making sure Sid doesn’t steal food from picnickers at Zilker Park!

If you don’t already, follow all of Alex Hopes’ accounts below, and make sure to say hi next time you see him at Zilker Park.

Have you ever hired a photographer to take photos of your dog?