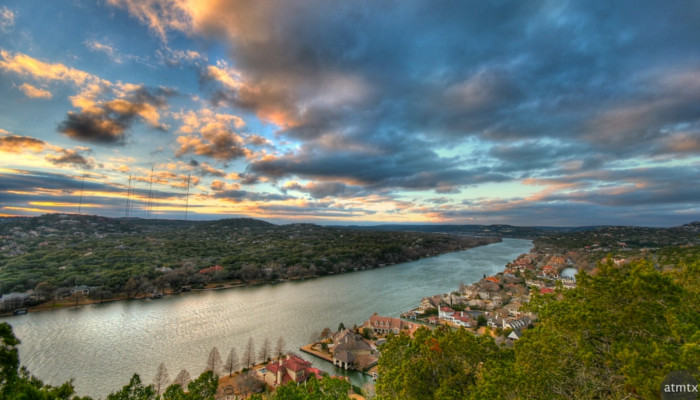 The view from Mount Bonnell (Credit: atmtx via Flickr CC)

It takes climbing 106 steps up a historical flagstone staircase to reach the top of Austin’s famous 775 foot tall promontory, Mount Bonnell. What is now a popular destination for tourists, photographers, couples and families was once a wilder, more rural part of Austin.

Though Austinites love to climb to the top for a quick photo, what do most of us know about this iconic natural formation? To get an overview of Mount Bonnell’s development, I asked the knowledgeable Kim McKnight from the City of Austin Parks and Recreation Department for details on what we should know about this Central Texas wonder. 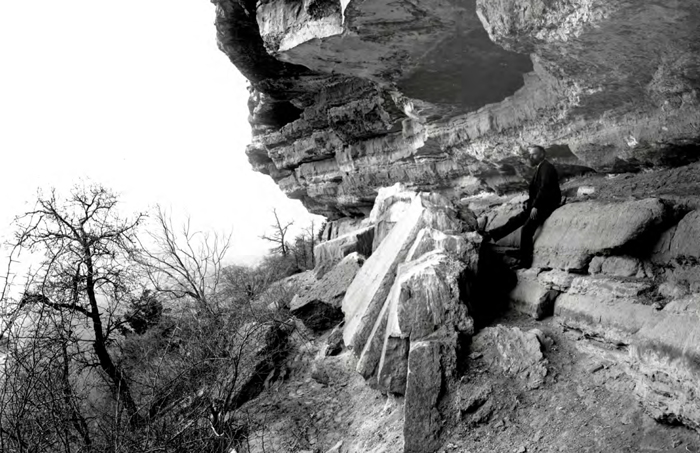 Located in what we now think of as West Austin along the Colorado River, Mount Bonnell was Native American territory before Anglo settlements began taking over in the 1830’s. Historical records show the first recorded thoughts about Mount Bonnell were written by soldier George W. Bonnell, who climbed to the top and wrote about his ecological findings. “Photograph of the Campbells and John Barry Caldwell at Mount Bonnell (Lover’s Leap) in Austin. The family is posing on a tree leaning off of a cliff. The Colorado River is visible in the background.” (Photo and caption credit: Austin History Center)

Later, Texas Ranger William A.A. “Bigfoot” Wallace brought tumultuous history to the land. In 1839, when race relations were ugly, he was celebrated for killing a Native American on a limestone ledge 50 feet above the water. He returned to the hill when he became sick with what was most likely cholera, and proceeded to live in a cave while recovering. It’s said he was gone long enough for his sweetheart to find a new man.

In the 1850’s, Mormons moved into the area and built a mill at the bottom of Mount Bonnell. The structure was lost in a flood, so the settlement moved on. Around this time, Sam Houston and Judge Williamson (also known as “Three-legged Willie”) visited the summit. According to a story published in J.M. Morphis’ “History of Texas: From Its History and Settlement,” Houston said, “‘Pon my soul, Williamson, this must be the very identical spot where the devil took our Savior to show and tempt Him with the riches and beauties of the world!’ ‘Yes, general,’ responded Judge Williamson; ‘and if Jesus Christ had been fallible, He would have accepted his satanic majesty’s proposition!’”

Mount Bonnell also became the site of celebrations. In the 1850’s-60’s, there were Maypole dances. In 1898, a woman named Miss Hazel Keyes, along with her pet monkey called Miss Jennie Yan Yan, completed a stunt where they rode a cable from the summit of Mount Bonnell down to the water!

What We See Today The shade arbor and historical monument

In the 1900’s, Austin businessman Frank M. Covert, Sr. donated the land Mount Bonnell sits on to Travis County. Fifteen years later, it was given to the City of Austin. The area at the top of Mount Bonnell was then referred to as Covert Park and, in the late 1930’s, a boulder monument was situated at the summit in honor of Covert. The process of repairing the Frank Covert monument in 2015 (Credit: Austin Parks and Recreation Department)

We no longer see only sweeping fields of endless green on either side of the water, now that residences have popped up, but there are still many beautiful examples of Texas wildlife at Mount Bonnell. Among the limestone there are persimmons, live oak, mountain laurel and ash juniper. Look out for Texas spiny lizards, purple martins and armadillos in the area, as well.

In addition to the change in landscape surrounding the small mountain, Mount Bonnell’s summit and staircase have underwent many improvements in the 1900’s. The two picnic tables were constructed in the 1940’s. In the 1980’s, the retaining wall along the left side of the staircase (looking up) was added, along with the shade arbor at the summit. The barrier goes along well with the historical flagstone stairs, which were built in the 1930’s and repaired in 1993.

Visiting the Peak of Mount Bonnell The history and lovely sweeping views make Covert Park at Mount Bonnell a must-see destination for locals and tourists. You can make a quick 15-minute trip up and down the summit, or you can take your time and absorb the sights from the peak of Austin. The shade structure at the summit of Mount Bonnell

To visit Covert Park at Mount Bonnell, you’ll drive up a steep hill past Mayfield Park and AMOA to 3800 Mount Bonnell Dr. This street feels like it’s taking you straight into the sky. Try to imagine riding up in a horse and carriage!

There’s plenty of parking along the rock wall. Keep in mind there are no lights at Mount Bonnell, so you should visit during the day and come down before it’s too dark to walk along the road to your car. 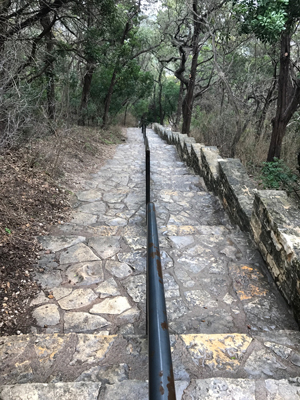 I heard one person say, “Oh, I thought that was going to be so much harder!” once they reached the top to their glaring friend who was completely out of breath

The historical 1930’s staircase might be difficult for some visitors to climb, due to its length and the steps being slightly different sizes and rocky. But it is very stable and there is a handrail up the middle (though some steps do not have access to the rail).

There is also a sloping trail that provides a less steep climb, but practical footwear will be needed due to rocky areas on the path. The trail runs between the informational kiosk (which provides great historical and ecological information) at the summit to the edge of the parking lot on the north side.

When was the last time you visited Mount Bonnell?

How fortuitous that this piece was linked from today’s newsletter – another guest at the RV park I’m staying at just recommended this to me today. It’s good to see a preview before making our way over there.

Very cool, @andreaelkins:disqus! May I ask which park you’re staying at? I’m always curious where people choose to stay in the Austin area. I wish there were more choices!

We’re at La Hacienda. It’s lovely and friendly. Only downside is we’re basically in the pricey ‘burbs for miles. Apparently I was extraordinarily lucky to have called in January just after they’d had a cancellation. The next two winters are already booked up so we’re on the waiting list. I think there’s an opportunity here for more RV parks for sure. I had called last JUNE to 5-6 parks in the area, looking for Nov/Dec/Jan stays, and no one had any space!