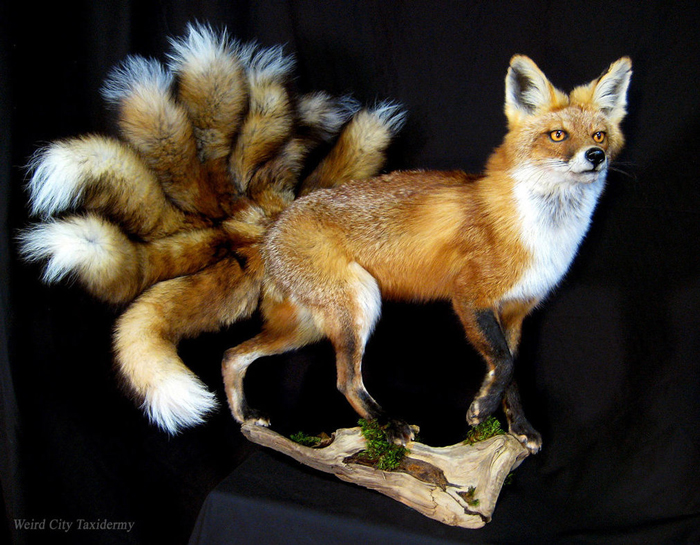 Rachel Ahern isn’t interested in hunting, but reimagining creatures back to life through the art of taxidermy fascinates her. From the traditional to the fantastical, Ahern uses animal pelts to make shoulder and full-body mounts at her unusual Austin business, Weird City Taxidermy. The question everyone asks: How did you get started? For Ahern, forming her own taxidermy business was a winding road. While getting a degree in accounting, she found herself googling “realistic stuffed animals” one summer day out of curiosity (try it to see a whole other world of surprisingly artistic stuffed objects.)

She ended up finding websites that detailed the process of how to soft mount actual animals. Not one to turn down a challenge, Ahern started her taxidermy journey with a soft mount red fox, and eventually tried a more traditional taxidermy form with a squirrel. Despite the look of shock her mother wore after walking in on Ahern skinning a squirrel in the garage, she began formal training in 2010 to improve her skills.

After a few years in the accounting field, Ahern knew it wasn’t the path for her. She ended up pursuing 3D animation at Austin Community College and getting more serious about her work as a taxidermist. In the present, she balances animation commissions along with her three-year-old, one-woman business, Weird City Taxidermy. Before and after bobcat forms (Credit: Weird City Taxidermy)

Ahern focuses mainly on mammals, and orders for traditional, shoulder-mounted deer make up the bulk of her business. Hunters only bring in the heads of their deer, as the rest of the body is processed for eating. Once she unveils the deer head that’s typically carried in a plastic bag during drop-off hours, she immediately goes to work with a scalpel to skin the animal.

This is where many people shy away from the taxidermy process, which can be gruesome, but Ahern notes that skinning an animal isn’t as bloody as one would think. Since the creature’s heart is no longer pumping blood, the scene isn’t like a horror film, and taxidermists are careful to avoid cutting into any organs. Once the skin is pulled away from the skull it needs to be tanned (turned into leather) to keep the skin from rotting. Ahern currently does this part of the process in-house, but many taxidermists ship their hides to a tannery. Once the skin is ready, it’s attached to a polyurethane form. Forms are interesting objects in their own right. They possess some of the musculature of the animal, but have neither ears nor defining facial features, so they oscillate between endearing and disturbing. Ahern can carve into the form to create different muscle indentations, or she can score the material right away and begin attaching the hide with glue. The antlers (which were removed as a pair from the skull) are secured into the form. To finish off the piece, she paints on the nose and adds detail to the eye area with glass eyes and paint.

Customers get their taxidermy creatures back anywhere from four to six months after they’re brought into the shop, as it takes some time for all of the materials to come together. When hunters come in to pick up their piece, they usually immediately zoom in on the antlers while, amusingly, Ahern has spent hours focused completely on the face.

From Stuffed Animals to Soft Mounts Soft mounts don’t get much respect in the taxidermy world due to the style’s disregard for life-like qualities, but this is what introduced Ahern to the field. On her workbench, I saw a nearly completed fox soft mount. Its head appeared traditionally wrapped around a form and alive, while its body was stuffed like a pillow.

Ahern says her soft mount customers are typically younger women, and the resulting piece might be laid out in a bedroom or even taken to a Renaissance festival. Unlike traditional taxidermy, these creatures are seen as touchable. People like to pet them, carry them around, or sling them over their shoulders. Perhaps the most eye-opening section of the Weird City Taxidermy website is the “Novelty/Fantasy” photo gallery. For Ahern, fantasy taxidermy involves creating animals that don’t exist, but look like they could start moving at any moment. She makes these creatures for commissions, or for fun, and then sells them on Etsy or eBay.

It takes hours of research to figure out how to fit together all of the parts to make a new creature. In the case of the Black Stag, Ahern knew the client wanted something larger than a white-tailed deer, but smaller than an elk, so she chose a red deer form. From there, she stained elk antlers and dyed the pelt black using human hair color and fabric dye. To complete the creature, she fashioned one and a half Icelandic sheepskins, and a white-tailed deer tail, to fit onto the form. The result stands majestically in a customer’s home in Winnipeg, Manitoba, as if it wandered in from another dimension.

The Delicate Nature of Pets Ahern has a disclaimer on her website explaining that she doesn’t take on pet taxidermy. The reasons are both logical and sensitive. The emotional strain both the taxidermist and customers face when dealing with a pet that has passed on can’t be taken lightly. Molding the personality of the beloved animal the owner knew so well is nearly impossible, and the replacement glass eyes won’t be the ones the pet’s family remembers.

While Ahern has cleaned skulls for customers who want to keep their pet’s skull, the process might not sit well with everyone. Basically, the animal must be decapitated, before the eyes and brain are removed. Ahern says that, to her, this is the most grisly part of the process of taxidermy when it comes to any creature.

With all the skulls that Ahern acquires, she uses a natural process to clean the bone, called maceration. The skulls sit in a covered bucket of water for about a month, until all of the muscle and fat slide off. Once the smelly bucket is emptied, the skull is washed and brightened with peroxide, which doesn’t damage the bone. Ahern learned the hard way that, sometimes, tiny rice-sized teeth might fall out of the skull and into the depths of the bucket gunk. She no longer has to fish them out, now that she uses a wire mesh covering around the mouth area.

Now That Your Interest Is Piqued 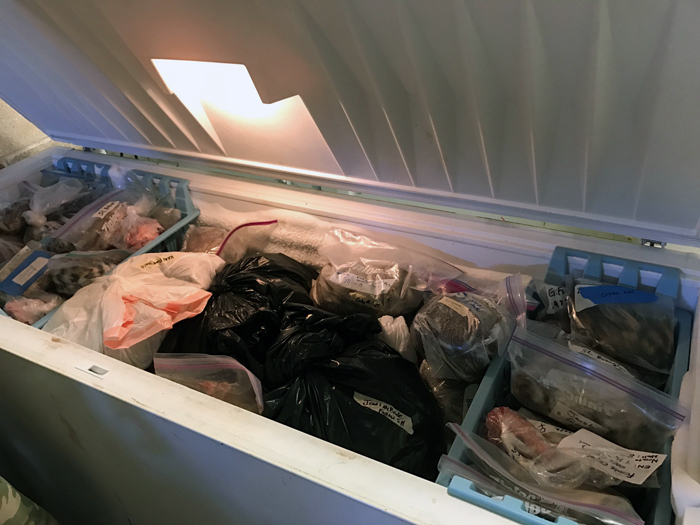 A freezer full of skulls and skins

It’s immediately evident through her enthusiasm and impeccable work that Ahern loves her job. She knows it’s a strange path, but she revels in the oddities of daily life as a taxidermist. While creating the “illusion of life,” she’s forced to constantly confront and ponder death, reaching a relaxed but respectful outlook on the cycle of life.

To learn more about Weird City Taxidermy and check a price list, visit the business website. If you want to see more photos (even the bloody ones), visit Ahern’s Deviant Art page. To purchase a skull, keep an eye on Etsy or eBay.

If you visit the Weird City Taxidermy shop, you’ll notice Ahern shares her space with talented taxidermist Larry Neal of Sendero Taxidermy, who specializes in bird and fish mounts. The address is 2255 County Road 172, Suite #304 in Round Rock, just north of Austin city limits.