Did you know we have a frozen banana paradise right here in Austin? Bananarchy is a local food truck specializing in delicious, vegan desserts. Just imagine a frozen banana plunged into chocolate, and then sprinkled in yummy toppings like M&M’s or Oreo crumbles. One taste and you’ll be hooked. I know I was! Choose a recipe on the Bananarchy menu or customize your frozen treat (Credit: Bananarchy)

The recipes on the menu are just suggestions. You can customize your frozen banana to meet your preferences. I highly recommend the Milly Vanilly, which is a banana double-layered with both vanilla and chocolate, rolled in a topping of your choice. If you’re feeling adventurous, you might want to try the GOB–two whole bananas double-dipped in chocolate, and finished with a layer of nuts.

Bananarchy offers four dips and 11 toppings, so you’ll be trying fun combinations for a while.

➡ Keep reading: Expand Your Taste With These Funky Sweet Spots in Austin

The Story Behind the Banana 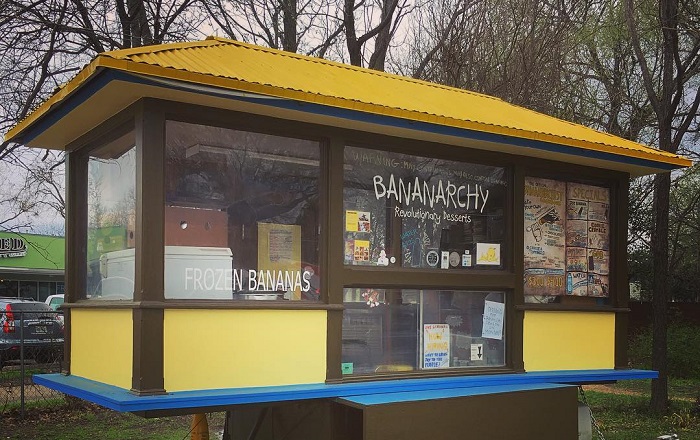 The show, “Arrested Development,” was the inspiration for Bananarchy. College student Anna Notario and her roommate communicated the idea of starting their own banana stand to their friend, Laura Anderson. But nothing happened after the initial conversation.

“It was one of those things that you talk about, but don’t do,” Anderson said. During summer break in Mexico a few years ago, she couldn’t stop thinking about the banana stand. She lost hours of sleep coming up with ideas for it.

Anderson was so into the idea that she even changed her senior thesis to document starting a banana stand. The last step was to actually get started. Anderson got Notario back on board, and the two friends became the co-founders of Bananarchy.

With only $8,000 and no idea what they were getting into, the two pushed forward. Members of their co-op helped paint the trailer and experimented with different banana recipes. The rest, as they say, is history.

Joe Banana! Do you take it black or with cream and sugar?

Bananarchy only uses ingredients from socially-responsible banana and chocolate companies. Bananas are usually sourced from Earth University, and the Austin business only purchases Fair Trade chocolate.

Bananarchy is also environmentally-conscious. The team composts all of their banana peels, and recycles items both front and back of house.

If these frozen treats are sounding more and more ‘a-peeling’ to you, then check them out before banana season is over!