The ACL Fest entrance welcomes music lovers from all over Austin, and the world
(Credit: John Cabuena/Flipintex Fotos)

Confession time: Weekend One of Austin City Limits Music Festival was my first ever. As a newborn at the event, I attempted to absorb as much as possible from three days of crowds, sun and mind-blowing music. Not only did I walk away with a greater appreciation for one of Austin’s most anticipated concerts, but I was re-invigorated by our community’s love for live music.

Here are 20 things I learned during Weekend One of Austin City Limits Music Festival. Maybe you’ll make similar discoveries during Weekend Two. Most of all, I hope you’ll have a memorable experience that’s uniquely your own.

1/ Investing in a Camelback is vitally important for surviving Austin’s 90 degree fall weather. Even before fans arrived, Zilker Park was blazing hot on the opening day of ACL Fest 2016 (Credit: John Cabuena/Flipintex Fotos) 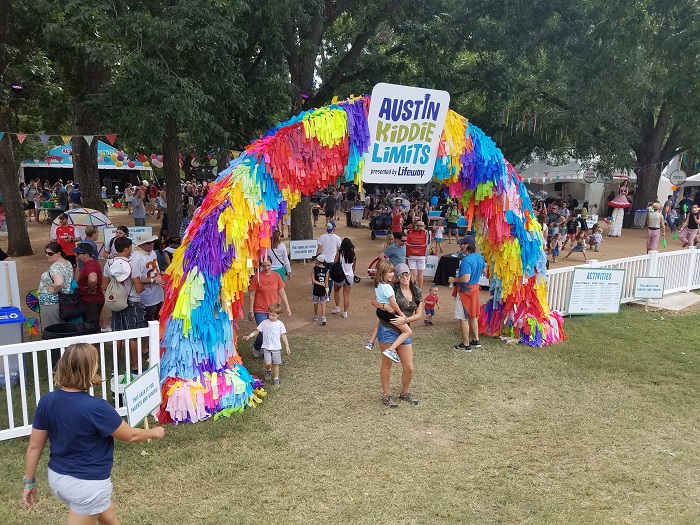 When my four month old attends ACL Fest next year (because he’ll be one and that’s so happening), he’ll love it.

3/ Sunsets over Zilker Park are stunning. Especially after rain clouds and when it’s the backdrop for massive stages and throngs of people.

4/ Teenagers turn into rabid animals when exposed to dance music. Young attendees gets into the spirit of the festival (Credit: John Cabuena/Flipintex Fotos) From Matt the Electrician’s charming folk to Shane Smith’s driving bluegrass to Wild Child’s exuberant energy, Austin music was well-represented during Weekend One.

6/ The craft beer tent pavilion barn wooden warehouse was pricey, but worth the extra dollar for quality, local brew. 7/ Shade is plentiful, but you have to arrive early to enjoy it. From ACL Cares and the art market, to an autograph signing area and a gaming hall, there’s plenty for everyone to do between music sets.

9/ If you’re not eating well, then you’re probably not eating. ACL Eats brings together dozens of food trucks and eateries. Chi’Lantro was one of 30 local food trucks and restaurants serving up goodness at ACL Eats (Credit: John Cabuena/Flipintex Fotos)

10/ No matter how many great bands are playing around them, Texans will always gather to watch football. 11/ There are three methods of listening to ACL Fest music: Whether you camp out at a stage or flit about the festival, you’re experiencing ACL Fest your way (Credit: Bill Tucker) Walking the festival is like tuning through stations on an old-time radio. Sounds, styles and genres crossfade together, creating a tapestry of sonic beauty. I felt like I was walking through a DJ’s mixtape, and it was fantastic. From small stages to huge, there is music everywhere at ACL Fest (Credit: Bill Tucker)

13/ Flags, balloons, signs on fishing poles and dancing skeletons are the only ways your group will be able to find each other in the crowd of thousands. The signs and flags some people bring to ACL can be hilarious (Credit: Bill Tucker) Just give your little one a set of noise-dampening head phones and let them hang with the grown-ups.

15/ Somehow, walking among 70,000 people doesn’t feel like drowning in a sea of humanity. 16/ The smallest stage (Tito’s) was one of my favorites. The covered area not only provides relief from the heat, but gives lesser-known bands a chance to play to a larger audience. Never underestimate the power of shade. 17/ Hippies, rockers, 50 year old couples and UT freshman all peacefully co-exist in a park that is occasionally too hot, too crowded and too noisy. But always fun. 18/ For all the grief it gets for corporate sponsors, noise and snagging two weekends of our best weather, Austin City Limits Music Festival represents what our fair city is all about. An event where over 100 bands play on eight stages for 70,000 people, and live music rules over all. 20/ ACL will remind you that music is magic. A couple stands against the setting sun of Weekend One of ACL Fest 2016 (Credit: John Cabuena/Flipintex Fotos)

my favorite ACL memory is the relief of knowing I havent gone to ACL in 5 years. ACL rapes you of your money for a contrived, over saturation of musical acts, intense crowds and lines for everything imaginable and some things you can’t imagine. Life Tip: if ya really wanna see some of those bands, catch them on youtube the next day or at a smaller venue outside of ACL in a more intimate setting. You will enjoy it so much more..

You seem really fun and positive.

also realistic and experienced in the ways of the festival

“catch them on youtube the next day” yeah, because that’s the point of live music.