Like a perfectly worn-in pair of cowboy boots, slipping into a classic dive bar to down a cold one provides true comfort. The Hole in the Wall is as divey as they come. I’m grinning from ear to ear as I order my tequila.

Diviest Dive in All the Land 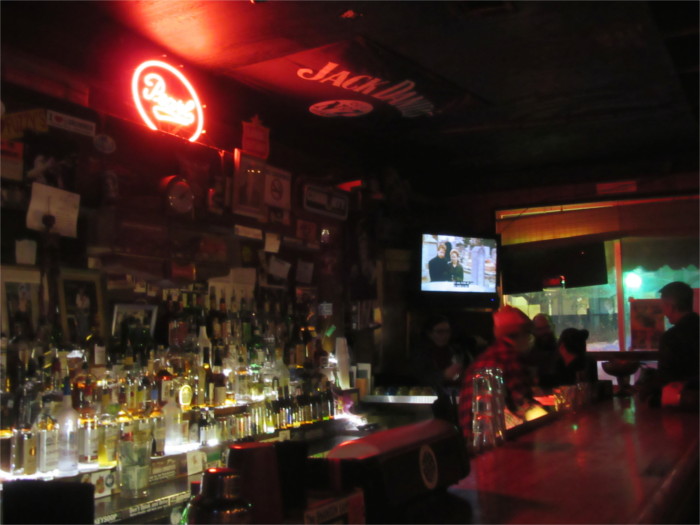 The faded sign and tattered awning beckon local Austinites and adventurous visitors. Dive bar heaven awaits! Entering The Hole in the Wall on Tuesday afternoon, squinting in the traditional dive bar darkness, I belly up to the bar and am immediately transported to every dive bar I’ve ever known.

The Hole in the Wall is one of the dive bars and live music venues that define Austin. After a close call last year when the place almost had to shut its doors for good, it still stands. And it stands for everything we love about Austin.

Open since 1974, The Hole in the Wall has a decades-long history of showcasing live music. Some nights are laid back, but other nights the bands are on fire with the kind of raw energy that launches musicians into the stratosphere.

The Music: Fabled Past, Illustrious Present Local artists from Stevie Ray Vaughan to Shakey Graves have graced the stage at The Hole in the Wall
(Credit: Austin City Limits)

Local legends Doug Sahm, Stevie Ray Vaughan, Alejandro Escovedo, Ian Moore and the Hickoids have all graced the stage. Today’s red-hot local darlings Shakey Graves, Bob Schneider, Black Joe Lewis and Gary Clark Jr. can all thank The Hole in the Wall for helping launch their careers. I’m tempted to drop to my knees a la Wayne and Garth and declare my unworthiness as I stand in front of this celebrated stage. Somehow I manage to keep it together.

The bar is as proud of its storied past as it is of being a place where an unknown band can throw down and blow some minds. One can feel the energy of past performances being channeled through the bands playing there now. The stories and list of luminaries who have played and partied there is miles long–too many to mention here. The venue’s website offers a glimpse into the wild nights at The Hole in the Wall over the past four decades.

Today, the live music calendar is jam-packed with talent, both established and yet undiscovered. The bar prides itself on continuing to champion new bands while hosting more well-known musicians. Walk in on a random night and you might catch Mayeux and Broussard’s self-proclaimed Swampy Tonk music, Interrobang’s brass band funky groove or Candler Wilkinson’s western swing stylings. Nakia has played there, as has, most likely, your cousin’s neighbor’s best friend’s garage band.

Easy to Love The Hole in the Wall Chatting with event coordinator and bartender Lynn Cowles, it’s confirmed that Austin adores this iconic little bar. Cowles is a HAAM Enrollment Specialist who started working at The Hole in the Wall after putting in her time as a regular during grad school. She filled in for a departing bartender one SXSW, and the rest is history. This type of story, of drinking or playing music at The Hole in the Wall and then starting to work there is not uncommon. The charm and familiarity of the place draws people in and soon becomes a necessary part of their lives.

Any time of day, any day of the week, you’ll overhear regulars toasting the bartenders or giving an animated account of a recent show they caught on one of The Hole in the Wall’s two stages. Considering the proximity to The University of Texas, this isn’t merely a college bar. Its history is too rich for it to become such a one-note locale. With two stages, three bars, nightly music, patio, old school photo booth, pool table and even a new Michi Ramen restaurant in the back, The Hole in the Wall has something for everyone. Everyone with a fondness for dive bars, that is. Monday through Friday, the extended happy hour offers drink specials from 3-8 p.m. An acoustic happy hour band starts at 7 p.m. six nights a week to provide musical accompaniment to those tears in your beers. Speaking of beer, The Hole in the Wall boasts a good selection of local brews. Sip some hooch on the patio, play pool or go for a steaming hot bowl of Michi Ramen

As hallowed as The Hole in the Wall is, its place in an ever-changing Austin is not guaranteed. In 2015, when owner Will Tanner feared he would have to shut down, the Austin community rallied behind the bar in force. This bought them some time. With a five-year reprieve, The Hole in the Wall will keep rocking, swinging and cocktail-slinging for the foreseeable future.

I know I’ll be heading back soon to soak up more of that Hole in the Wall coziness and brilliance. Let’s all get out and show this Austin classic some love. Who knows? Maybe you’ll meet the love of your life like one recent patron’s parents did (way back in the day), according to Cowles. Or you might witness the beginning of a musical juggernaut’s career, like the greats I mentioned before. Anything is possible at The Hole in the Wall, after all.

What is the best live show that you’ve seen at Hole in the Wall?

Roughing it in Austin, TX. Then blog about it.

“It smelled of stale beer and broken dreams. Old Austin sure was dirty.”

Oh yes! That sounds like Hole in the Wall for sure! Haha, Old Austin has a grit to it, that’s for sure. And that is part of the charm.