Music should be a constant evolution. If a band’s fifth album sounds the same as the first, something is wrong. And while die-hard fans may want the same old, same old, the work of a musical artist almost inevitably changes as he or she does.

With her April 29 record release show at 3Ten Austin City Limits, Emily Bell shook off the retro soul trappings of her former self, and donned a rock star persona of leather and lace. Vibrant and urgent with a rock-n-roll strut, Emily Bell and The Talkbacks’ latest crop of songs balances beauty and blast in every hard rocking note. 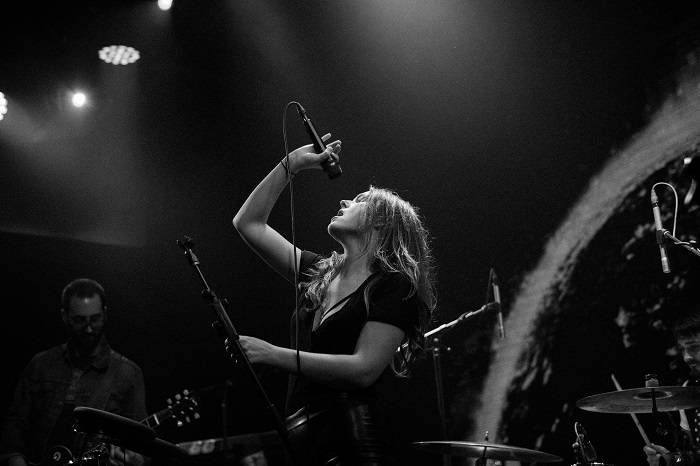 For Emily Bell, change is nothing new. Whether it’s performing musicals in College Station, doing theater in Houston, or landing an R&B recording gig at an LA studio, Bell has been an artist in constant metamorphosis.

But after moving back to Austin to record her first album, a retro soul LP entitled “In Technicolor,” she realized the musical suit she was wearing didn’t quite fit. “After I released that record, I learned a lot of lessons,” shared Bell. “A couple of years ago, I came into a place of fully trusting myself creatively and saying, ‘f—k it,’ I’m going to do exactly what I want to do, for now and the rest of my life. The new record is creatively 100 perfect me.” The new record is “Kali,” a blistering five song tour-de-force of garage band growl, sing-along choruses, and Bell’s pleasing yet aggressive vocals. For the artist, and her band The Talkbacks, this is a welcome departure from previous work.

“There’s a message in this record about female empowerment and accepting who you are,” said Bell. “There’s also an embracing of destruction and revolution in the album. I hope people can listen to it and feel empowered for the big fight ahead of us.”

The record’s leadoff single, “Can’t Talk Back to Me,” captures that “don’t tread on me” spirit with blazing guitar fuzz and slamming drums, courtesy of Bell’s backing band. “Goddess of Destruction” showcases Bell’s considerable vocal range, bouncing from introspectively urgent to big and blaring within four minutes. When she sang the lyrics “I’m gonna knock it down” during her record release set at 3Ten, you could feel the walls tremble.

“Girls That Never Die,” an in-your-face female empowerment anthem, is my personal highlight. At the show, Bell’s coy delivery played counterpoint to thumping bass and drums, while protest scenes from the women’s suffrage moment played on a screen behind the stage. As the song climbed to a hero’s chorus, the air was alive with energy. Emily Bell goes back and forth with her drummer during a set at 3Ten ACL (Credit: Katie McDowell)

Emily Bell’s heart for women’s rights doesn’t stop with her lyrics. All proceeds from album sales at the show went to Girls Empowerment Network (GEN), a nonprofit Bell has a deep connection with. The organization works with over 13,000 girls a year, providing summer/afterschool programs, workshops, and peer mentoring, all focused on helping young women develop the skills they need to thrive.

So, when Bell sang the lyrics, “We are the girls that never die,” the 2nd Street crowd knew it was genuine. In fact, the entire one-hour set screamed authenticity. As the band jammed hard rock song after hard rock song, the music tossed Bell about the stage like a puppet on a string. Feeling every note, Bell’s performance felt raw and unscripted, but never unhinged. According to her, this is par for the course.

“When it comes to performing live, there’s very little I remember after the show because to put on a good performance, you have to completely lose yourself. And that’s what I try to do every single time.”

Losing yourself is a good way to describe an Emily Bell show. Balancing sensational vocal chops with a hard rock edge, Bell has created a sonic seesaw. One second you’re thrusting your fists skyward in an act of musical defiance, while the next you’re dancing the night away to tightly crafted rock and roll.

Remember my opening paragraph about musical evolution? Forget it. Emily Bell is more than welcome to stay within this incarnation of herself for as long as she wants.

What is your favorite Emily Bell song?