A look at the Chi’Lantro food truck in Austin

I’m new to this whole food truck thing. The Boston idiot in me always ignorantly associated food trucks with low-quality, 2 AM sausage carts one accidentally staggered upon amidst a night of heavy drinking. Since moving to Austin, I stand corrected.

I now associate food trucks with magical, utopian dreams filled with unicorns and happiness. Seriously though, I’d approximate that food trucks now represent over 90% of my diet. Where have they been all my life?

As if I couldn’t be more captivated by the enchanted universe of street food, I recently sat down with Jae Kim and Eric Silverstein, founders/owners of Austin’s Chi’Lantro and The Peached Tortilla, respectively. Now with brick and mortar locations as well as food trucks, both Jae and Eric offered an insightful behind-the-scenes take on what it’s like to grow a successful business, through a long road of early struggles in a relentlessly dense market.

More insightful than the business side of things, however, was the story of their friendship, and how the competition between one another was perhaps the most critical ingredient to their shared success.

On the flip side, the Peached Tortilla truck

I figured running a food truck was a tough gig, but I had no idea just how demanding it can get. Here’s Eric describing a typical day with The Peached Tortilla:

“I would wake up and drive to Pflugerville at 8:30 AM (where the truck was stored) to prep, leave by 10:30 to get to my location by 11, serve lunch, break everything down at 1:15 PM, clean the truck, restock everything for the night shift, open back up at 7 PM, close at 2:30 AM, drive back to Pflugerville to clean the truck, get done by 5 AM, then get to bed so I can wake up and do it all over again.”

Jae of Chi’Lantro added, “I would purposely sleep on the floor because I knew if I slept on the bed I wouldn’t wake up. I was always tired and irritated.”

Beyond 21-hour workdays, both Jae and Eric suffered the financial burden of initially leasing their trucks through a local commissary. With commissaries come high rent costs, mark-ups on food and limited food storage.

Through all of this, however, they found motivation in competing with one another, which eventually led to their friendship. Both Jae and Eric’s timelines are remarkably similar, and pushing each other through difficult times has served not only as support, but also as competitive fuel.

“We saw each other every day and competed, but we were friends,” Jae explained. “We were able to become friends because we went through similar experiences work-wise and understood the hard times that come with the food truck industry.”

In just five years’ time, both graduated to owning their own restaurants. While they still operate food trucks, their respective brick and mortar locations are the main focus these days. Even now, they feed off of each other and are constantly sharing tricks of the trade and advice. Chi’Lantro offers Korean BBQ-inspired food and is known for their original Kimchi fries, French fries piled high with all of the good things. All of them. If you haven’t had them yet, you are a fool.

Jae opened his first of two brick and mortar locations in January 2015, with focus on a fast-casual experience. He describes his restaurants as operationally driven, and the importance of consistency is heavily emphasized. I can certainly attest to said consistency, as the Kimchi fries I ordered looked identical to the photo of them on their website.

Just a few of the menu items available at Chi’Lantro

The restaurants themselves feature a cozy ambiance and unique modern-retro décor. I felt automatically cooler just by walking inside. Eric Silverstein, owner and founder of The Peached Tortilla

Eric has gone in a different direction with his Asian-fusion restaurant since opening in November 2014. The Peached Tortilla highlights more culinary-driven concepts and features a full bar with a copious whiskey selection.

Also located on Burnet (right down the street from Chi’Lantro), the restaurant lends an elegant yet simple vibe and even hosts a patio area that is perfect for a widely popular Sunday brunch.

The food itself holds a keen attention to detail, and the menu is fit for enjoying solo or sharing with others. I’d highly recommend the Southern Fun “shareable” and/or the Kimchi Arancini Balls.

Looking Toward the Future 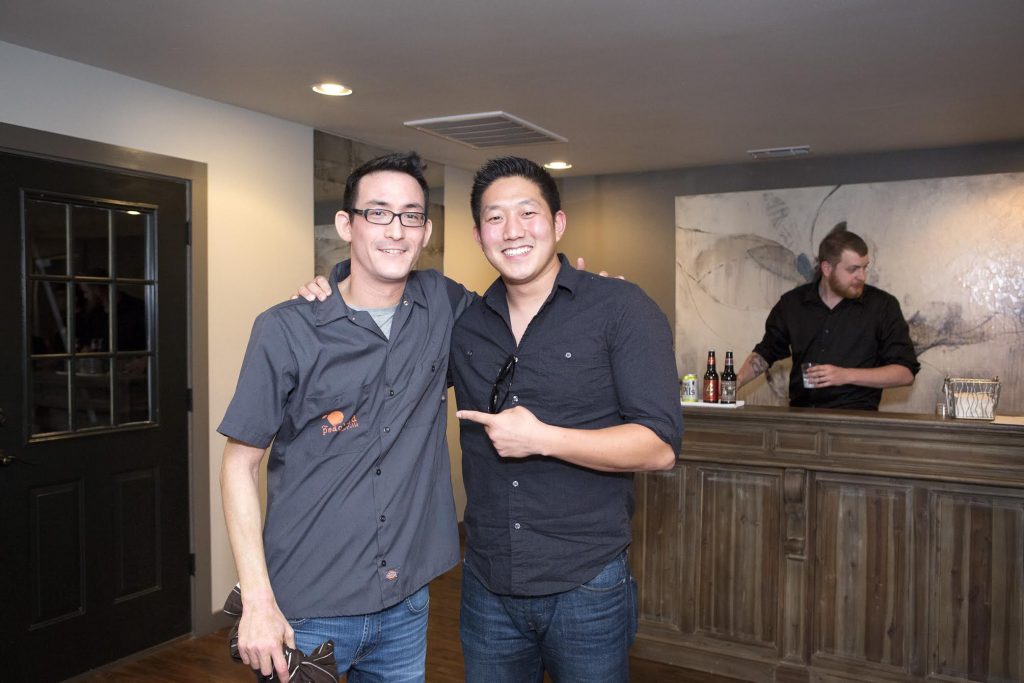 Eric and Jae of Chi’Lantro and The Peached Tortilla, respectively

Jae and Eric both have well-calculated growth plans in place, and are still relying on each other as they strive for higher levels of success. Even as I interviewed them, they were going back and forth as new restaurant owners, sharing tidbits of learned knowledge and advice.

I personally didn’t think my love for food trucks could grow any deeper, but somehow the food tastes even better knowing all of the hard work that goes into serving it. The Peached Tortilla and Chi’Lantro stand as two of the more well-established food-truck-turned-restaurants in Austin. If you enjoy street food even half as much as I do, these local businesses need to be on your radar.

Have you been to The Peached Tortilla or Chi’Lantro? If so, what did you think?