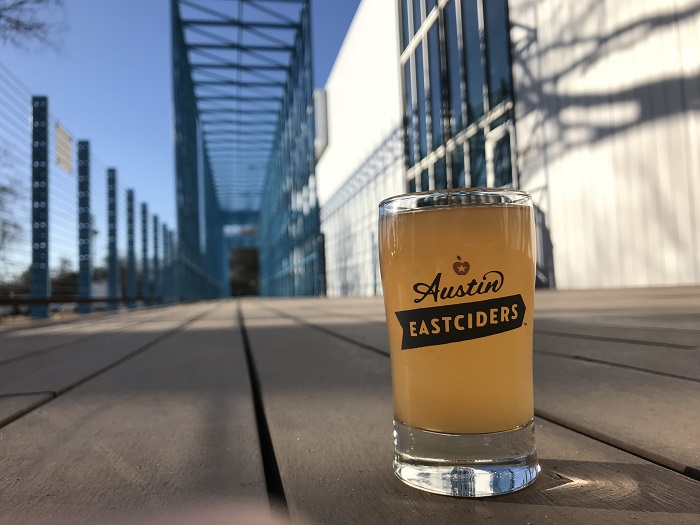 Don’t look now, but bars across America are being invaded by Austin’s own. Tito’s Handmade Vodka is king of cocktails and PBR has been ousted by Shiner as the hip beer of choice. (Shiner isn’t quite Austin, but it’s close enough.) Now we can add Austin Eastciders to the list.

In the span of four years, Austin Eastciders has grown from a humble cidery on Springdale Road to a nationally-recognized brand with two locations, distributing to over a dozen states. Not bad for a small town operation with giant dreams.

Thank you to Autin Eastciders for covering the cost of my flights for the purposes of this review. All opinions are my own. Austin Eastciders is the brainchild of Ed Gibson, an English cider bar owner who moved to Austin for “unknown reasons.” Shortly after arriving, Gibson met beer businessman Mark King, and a partnership was born. Armed with an exceptional recipe and the industry savvy to bring it to market, the pair founded Austin Eastciders in 2012, released that first cider, and never looked back.

Since then, the brand has skyrocketed to prominence. Austin Eastciders is available in 14 states and is currently the number one cider brand in New York City. Imagine my shock when I visited my old neighborhood last year and saw the distinctive blue and cream colored cans in a local bar fridge. ‘Twas a proud Austinite moment! Austin Eastciders can be found on tap all over the nation

As of this writing, Austin Eastciders offers five flavors of world class cider:

The defining characteristics tying the entire line together are clean and refreshing, without being overly sweet. Where lesser ciders have a sugary quality, Austin Eastciders’ core recipe mellows the sweetness, allowing fresh apple flavors to stand out.

Not surprisingly, it’s all about the apples. The beverage-making wizards at Austin Eastciders use a mix of bitter-sharp and bittersweet cider apples, sourced from Europe and Washington State. This specialization lays a high-quality base for the creative varietals.

And there’s more on the horizon. Austin Eastciders has been experimenting with new, one-off creations available only in the new taproom. During my visit, I was lucky enough to try cucumber and grapefruit ciders. Despite my aversion to cucumber, the cider had an enjoyable, bright crispness. If you like cucumber, you’ll love it. The grapefruit, however, was sensational. Big, bold, and bursting with rich citrus, this variety was my favorite of the afternoon. If grapefruit ever makes it to cans, it’ll be my new go-to (sorry, Blood Orange).

Austin Eastciders has even started a barrel aging program! As we speak, cider is being aged in gin, rum, bourbon, tequila, and wine barrels. A cabernet aged cider was recently released in the taproom and reviews were exceptional. There’s nothing better than booze straight from the source. Up until a few months ago, the only ways you could snag a pint of Austin Eastciders were to hit up H.E.B. or belly up to a bar. Thanks to a new taproom at the original Springdale Road location, you can enjoy a pint or a flight only a few feet from where it’s made.

Charmingly dubbed the “Collaboratory,” this space allows cider fans of all types and stripes to hang out, socialize, and try some of the team’s latest creations. But it’s not a simple bar in a brewery. It’s a place where the opinions of loyal customers can be heard.

“For the first time, we’re getting real-time feedback from our consumers, which is an amazing thing for a company to do,” shared Collaboratory Manager Marc Smith.

And it’s not just the local cider drinker who Austin Eastciders is collaborating with. Over the next few months, the Collaboratory will be partnering with organizations like Austin Art Alliance. The goal is to help raise money and awareness in support of Austin’s vibrant art community.

Smith also promises live music at least twice a week. During my Sunday Funday excursion, local indie electronica duo NAM provided a complex, dreamy backdrop to the afternoon’s festivities. That’s the vibe intended and achieved by Austin Eastciders, both in the taproom and the product.

During my visit, slices of Austin’s varied and vibrant community packed the Collaboratory. It was not only couples and singles, parents and toddlers, and longtime pals, but also new friends made while sharing a table and splitting a flight. Austin Eastciders is all about those connections, and it’s that dedication to unifying a community through exceptional cider that’s propelled the local business to national prominence. It’s great people making great cider for a great community.

Which Austin Eastcider flavor is your favorite?