You may know Austinite Aralyn Hughes from her apartment on the Weird Homes Tour, her performances, or her recently released book and documentary. Perhaps you’ve caught a glimpse of her art car driving around Austin, or you’ve seen a mural painted in her likeness at Bedichek Middle School.

If you don’t know Hughes yet, allow me to introduce you to the “Queen of Weird” through a peek into what’s going on in her life and mind.

On When the Weird Began The “Queen of Weird” moniker came from a CBS News story highlighting Hughes’ home off of Mopac, which was decorated with huge letters saying “Keep Austin Weird” and donned with eclectic décor inside. CBS told Hughes in advance they were labeling her “weird,” just in case it seemed offensive. Aralyn Hughes has never seen “weird” as an unpleasant term, but it was a surprise when she learned that was people’s perception of her.

After life as a Navy wife turned activist, she left the comfort of normalcy and moved to Austin. She recalls a subtle, but defining, moment in the ’80s, when her then boyfriend began a sentence with, “being eccentric, I know you…” This surprised Hughes. Was she really “eccentric”? She had never thought of herself as unconventional, and after studying Home Economics in college, she certainly wasn’t taught to be peculiar.

Later on, another fragment of insight came from a man installing her concrete driveway. He timidly asked her if she was a “good witch,” saying, “I’ve never seen a woman operate like you. You’re just powerful.” Hughes was even more taken aback: “You don’t see yourself the way other people see you, so I listen to what other people say and try to use the information to understand how I present myself.” 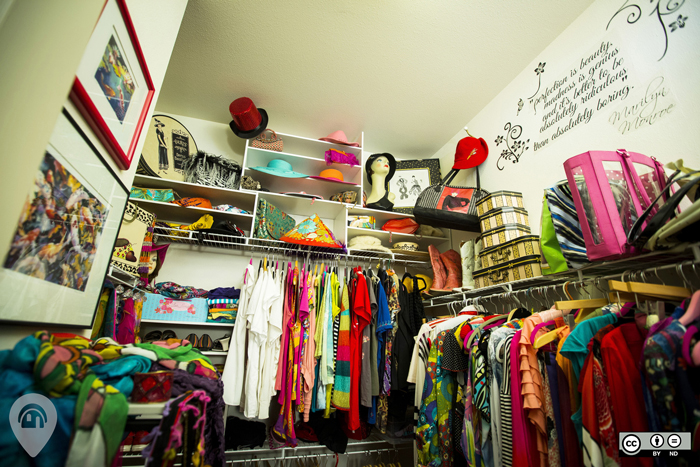 Hughes’ personality couldn’t be tamed when it came to acting gigs. Through several auditions, she realized she wasn’t getting the roles she thought she could easily fill. She asked for feedback, and was told her knack for comedic timing was coming through and she needed to pursue funny roles.

Opening up to the world of comedy, Hughes took improv classes at The Hideout Theatre and ColdTowne Theater. She has one memory when she was told she pushed things a little too far: “They stopped me and said, ‘You don’t want to make the audience uncomfortable.’ I’m not sure how much I paid attention to that, but it was interesting to hear those words. Because of my age, I think I can get away with things!” When Hughes performs as herself on stage, she candidly tells her stories and viewpoints. She has performed ten one-woman shows about love and life under the production title “Aralyn’s Home Economics.” Pairing vulnerability and confidence, she prefers to have direction, but remain flexible and allow for surprises, even to herself. Sometimes that manifests as finding things particularly funny or deeply emotional.

On Film and Paper

To promote her live shows, Hughes recorded promos. Her longtime friend, director and mentor, Amparo Garcia-Crow, suggested they take the leftover footage and begin weaving a documentary together about Hughes’ life, called “Love in the Sixties.” It follows her saucy and provocative journey to creative and emotional freedom, and features music from Garcia-Crow’s son, Shakey Graves.

While the documentary was coming together, Hughes took the time to compile a anthology called “Kid Me Not.” The book features honest writings from “women from the ’60s, in their 60s who chose not to have children.” These retrospective works have brought to light many aspects of womanhood and aging that aren’t often openly talked about. A pet potbelly pig, Ara, was one of Hughes’ firsts–her first unbreakable bond with an animal. While helping out with a silent auction for a nonprofit, she bid on a potbelly pig, just wanting to get the bidding war started. Even though everyone seemed to love the “demo pig” that was attending the auction, she ended up being the only bidder, and therefore the winner of a baby pig.

After visiting the pig farm several times and meeting different litters, Hughes wasn’t sure if she could commit to pig ownership. Finally, during her last visit, she saw two pigs placed in a box with the intent of getting a bit of human socialization. “In this box was a boy pig strutting around, big and tough and acting like, ‘Look at me; I’m the top pig in here.’ The other pig was very dainty for a pig, and she looked up at me and batted her eyes, and I thought that’s my pig!”

If pigs are lifted off the floor, they squeal loudly until they’re returned to their natural place on the ground. Hughes had to train Ara to be picked up. After mastering that trick, Ara’s skills didn’t stop growing. She learned how to bow, sit, turn around, bowl and do figure-8s between Hughes’ legs. Ara even acted during some stage performances in Austin.

Aralyn Hughes and Ara were quite the pair, and both achieved popularity through Hughes’ downtown real estate office and press from the likes of Discovery Channel’s show, “Weird Wheels.” Ara passed many years ago and, despite the bond, Hughes never wanted to attempt to recreate the relationship. “My mother and I had such an unconditional love, such a connection and such a bond that I couldn’t imagine creating that with another human being by having a child. And in a way, with the pig, I had a similar experience.”

On the Final Bow In 2012, the students of Bedichek Middle School (off William Cannon Dr.) helped paint murals of four local heroes representing the best of Austin. Hughes was chosen to represent “creativity and joy.” Queen Lola is also featured.

Born on May 29, 1946, Hughes will soon celebrate her 70th birthday. She’s living a full, vibrant life, but she’s also taking the time to plan her death. Since she has chosen to have no children and no spouse, Hughes wants to make sure her wishes are clear. She’s written her own, “nonboring” obituary, and chosen an eco-burial site where she will be laid to rest with a simple rock reading: “She never ran out of things to talk out, she just ran out of time.”

Hughes is aware of how “weirdly” open she is about death, but she notes, “Being eccentric doesn’t mean that you’re not practical. I consider myself practical and responsible. I like to climb on the edgy branches, but I know the risks.”

Few people will speak so candidly about death because of an overall fear of life ending or a fear of tempting their fate. Hughes addresses fear in the way her father taught her. When she was afraid of a spider, he said, “Go get the ‘S’ volume of the encyclopedia.” After learning all she could about spiders, she grew to appreciate and even love the eight-legged creatures she once dreaded.

Hughes approaches death in a similar way, with a combination of knowledge and curiosity. “You can know what to expect up to death. And after, I look at it as a surprise. It’s going to be a new first for me, and when you get to be my age, you’ve done all your other firsts.”

The Conversation With Aralyn Hughes Continues

From pigs to taking her final bow, Hughes can talk about anything with her own brand of wit and flair. She’s one of the many unique people who keep Austin creatively vibrant, and I’m happy to call her my friend.

To keep track of Hughes, check out her website. Keep an eye out for showings of her documentary and order her book here.

What’s the most eccentric part of your personality?