Could you create a successful business with funds found in your closet? How about turn the laundry room into a production facility? What about solve a child’s health problem and find your passion all in one bubbling pot? Jae Benjamin discovered a passion when she set out to create wholesome, natural soap for her family.
Credit: Sarah Teveldal, Flashpool Productions.

Benjamin Soap Co.’s story begins with Jae Benjamin’s desire to rid her young daughter of a problematic rash. Red bumps and an unexplained dryness were plaguing the child’s skin. The family doctor suggested changing laundry detergent and then investing in expensive allergy testing. Benjamin decided to try resolving the problem at home.

“I took a look at holistic health books, investigating ways to get toxins out of the cabinet,” Benjamin recalled. “You’d be surprised at the ingredients you find in everyday products.”

Currently a stay-at-home mom of two, Benjamin had always been something of a maker, so she put her skills to use. She combined a small number of ingredients (oatmeal, baking soda, lavender) to create bath soap and eliminated store-bought cleansing products from her home. Within a week, her daughter’s rash, redness and discomfort had disappeared.

Friends noticed the improvement. When Benjamin shared her experience along with sample soap, word got around and Benjamin began getting requests. “I said to Drew [Benjamin’s husband], ‘This is not a soap store!'” she recalled laughingly.

Cashing in to Fund a Soap Company There was, however, a business to be crafted. The Benjamins decided to pursue Jae’s new passion, and Drew offered $1,000 as an investment. Jae, though appreciative, declined; she wanted to fund her endeavor independently.

“I started with nothing and grew up very poor,” Benjamin explained. “I learned that you don’t need a lot of money, just an idea with good bones and willingness to work hard.” She made $500 selling personal items online, purchased supplies and commandeered her six-by-three-foot laundry room for production, churning out enough bars to stock an introductory sales party. It was a success. Everything was sold, her start-up investment recouped and two pages of orders gathered. Benjamin Soap Co. was out of the blocks running.

As the business grew, Benjamin relocated her working area throughout the house: from laundry to kitchen and into a recently remodeled guest bedroom. The frugal CEO works to keep costs low, and she and Drew are still the only employees. “When I say ‘hand-poured,’ I mean I poured those soaps,” she emphasized. “Drew helps [around his work hours]. He does the color; it’s his art side coming out. I love that this is something we do together.”

There have been rookie mistakes (starting out with 21 varieties of soap, for example). Benjamin is a quick study, though. Now, there are six scents with a rotational limited edition seasonal and two private label ventures. The product line has expanded to include bath salts, lip gloss, candles and insect repellent. Benjamin even developed a deodorant by targeting a focus group: “I work out at the YMCA and I gave trainers free samples in exchange for their feedback.” Benjamin is rigorous in her testing and keeps detailed journals with notes on each batch of soap. Credit: Benjamin Soap Co.

Benjamin prides herself on using local ingredients whenever possible: goat’s milk from a farmer in Leander, Texas Hill Country Olive Oil from Dripping Springs, Zilker Brewing Co. beer, wine from Driftwood’s Duchman Family Winery, to name a few resources. She’s even branched out to grow her own organic lavender, basil, thyme and mint.

Round Rock Honey, though, has proven to be a particularly sweet connection. Looking to circumvent purchasing honey, Benjamin signed up for a beekeeping class. She asked so many questions about the workshop that the owners wondered, “What do you do?” Benjamin explained. It turned out that Round Rock Honey was looking for a partner to use its soap-grade honey. The two businesses worked a deal, and Benjamin got five gallons of honey as a signing bonus.

“It was such a fluke,” Benjamin said. “Had I not signed up for that class, I wouldn’t have made that connection. [Round Rock Honey] was my first wholesale client, and they’ve brought me a wonderful product and great visibility.”

Visibility rather than advertising has created a lather about Benjamin Soap Co. Placement in 6th Street’s downtown Littlefield Lofts and other Top Trip Rental locations has led to out-of-town orders. Hyatt Regency Lost Pines Resort and Spa in Cedar Creek recently added her products, and Jacoby’s Mercantile, Burlap Bag and Greenhouse Craft Food are some of the local craft retailers who carry Benjamin’s products. 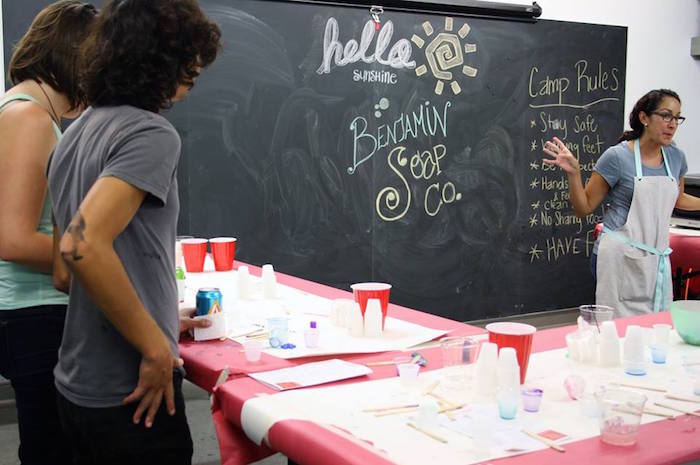 Business is not just about sales. Benjamin shares her soap passion via workshops and parties, and this outreach includes The Thinkery, Austin’s unique children’s museum with an emphasis on discovery.

“We love Jae and Benjamin Soap Co. here,” responded Adrienne Barnett, Public Relations Manager at The Thinkery. “Jae helped us add some scent to two of our August special evening events exploring color: our adults-only event, Thinkery21, and our Family Night evening program. Jae gave soap making demonstrations, and visitors got to make their own soaps to take home, using molds and adding fun, vibrant embellishments. She was so much fun to work with, and our visitors not only got to make soap, but learn about the process, too.”

Benjamin’s educational DIY mission includes private parties and pop-up workshops. She’s done baby showers (bath tea bags) and bachelorette parties (champagne bath bombs). “Everybody makes something,” she explained. “I provide step-by-step instructions and materials, and there’s a customizing aspect. Plus, [the end product] can be passed along. You also leave with the know-how to create your own.” Benjamin Soap Co. events bring out the creative side for all. Credit: The Thinkery.

Put Monday, Nov. 16, on the agenda. From 4 to 8 p.m., The Thinkery is hosting a member’s only holiday bazaar. Benjamin and many other vendors will be on hand. Beer and wine will be served, and drop off childcare with a “make and take” activity will be available for kids ages four and older.

Also, look for Benjamin Soap Co. to be a presence at the new Paper + Craft Pantry, a paper store that also serves as a collaborative craft workspace, opening this fall just east of downtown Austin.

If you could make your passion into a business, what would it be?