The Spencers’ vision for Ah Sing Den came from the venue’s namesake, an opium den in East London that was famous in the Victorian era. In the den, it was said both Charles Dickens and Sir Arthur Conan Doyle found creative inspiration. I was invited to stop by recently to sample Ah Sing Den’s new menu and find some inspiration of my own. 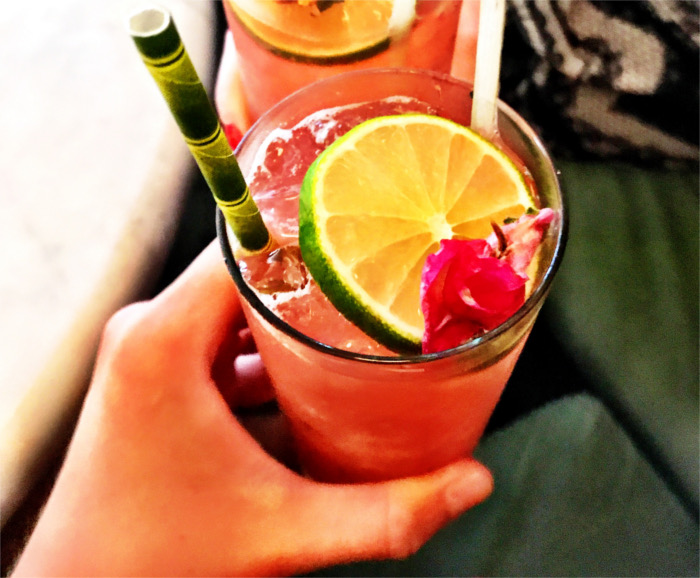 My first cocktail of the evening was a pink-hued concoction called The Josephine. I have to say it was an exceptionally smooth and refreshing sipper. The tequila blended pleasantly with fruity hints of lime, peach raspberry, and Italian aperitif, Aperol. It would be dangerous by Ah Sing Den’s pool—if there was one. When I ordered The Etheline, my server questioned whether I indeed wanted another cocktail, as dinner service was going to begin shortly, and would include sake and wine pairings. I assured him I was up for a second cocktail. “You have the ‘are you sure’ drink coming,” chuckled a patron at my table who had overheard the dialogue.

When The Etheline finally arrived, I had to drink my words. I took gentle sips of the potent mixture of Gem & Bolt mezcal, mint tea syrup, and sparkling sake. Usually, the cocktail features black currant. But the evening of my visit, mango puree and a chili powder rim were used instead (my favorite flavor combination). The Etheline is one of the best cocktails I’ve had in Austin. My plus one ordered the Watermelon Soju Gimlet while waiting for food, and it was a stellar choice. The cocktail goes down easily with its mix of soju, gin, lime, cucumber, and mint. Tapioca balls add an interesting visual and delicate flavor, while a beautiful pearl skewer and ornate garnish make it Instagram-worthy.

The menu for the evening was divided into six courses, each paired with an all-natural wine or sake. These were the highlights. The Poke nachos were the second item on the menu, and I could have eaten a plate full of them by myself. They were that good. This exotic twist on nachos features savory wonton chips with generous chunks of avocado, Sashimi tuna, house tri sauce, shishito dust, and lime.

This dish had every mouth watering at my table. The nachos were paired nicely with a bubbly glass of L’Onesta Lambrusco di Sorbara, a type of dry rosé from the Emilia-Romagna region of Italy. Full disclosure: I’m a vegetarian. The thought or sight of meat isn’t usually appealing to me. However, that night at Ah Sing Den, I decided I would take a bite of the pork ribs in the name of good journalism. After the first bite, I slid the tender, wild-caught Texas boar off the bone, into a pool of sweet and tangy Filipino barbecue sauce. Then I proceeded to finish it.

Needless to say, the ribs at Ah Sing Den are one of the best items on the menu, and I can no longer call myself a vegetarian. This meat dish was paired with a sweet Kikusui Nigori “perfect snow” unfiltered saki, which perfectly complemented the flavors of the ribs. The fourth dish of the evening was a Thai curry soup. Green tea soba noodles, a cabbage medley, and creamy coconut curry broth melded together to create a rich and comforting potage. And it tied with the poke nachos as the table favorite.

The soup’s accompanying wine was Andrea Calek Syrah from the Rhone Valley region in France. My server told me, “There is some funk going on in this wine, and it is absolutely delicious,” while pouring me a glass. Indeed, the unfiltered sediment played upon and delighted my taste buds. Dinner plates were whisked away and replaced by beautiful iron tea pots of piping hot Soho Blend black tea. I removed the teapot lid to peek at its contents. As I did, the tea’s heavenly aroma escaped, causing a wave of  “oohs and ahhs” at the table. Notes of chocolate, coconut, vanilla, and amaranth warmed my soul and highlighted the Asian-inspired churros plated for dessert.

Luxury is in the details, and that’s where Ah Sing Den shines. Early century decor, ambient candlelight, exquisite drinks, and unique dishes add up to an exotic sensory experience that’s elegant, yet intimate.

One of the most noteworthy and unusual details are the peacock-themed postcards you’ll find at your table. Fill them out post-meal, and Ah Sing Den will stamp and mail them for you. Don’t believe me? Stop by, have a tipple and a morsel from Ah Sing Den’s delectable menu, and pen someone a postcard yourself.

What’s your favorite drink or dish at Ah Sing Den?

Disclosure: Ah Sing Den covered the cost of my meal for the purposes of this review. All opinions are my own.