It was a warm winter day in Austin, and the air carried strange avian and insect noises, the constant screeching and buzzing of a southern place. I looked up and saw a tree in the parking lot of Fiesta Mart off I-35, ablaze with parakeets. Dozens, possibly hundreds, of electric-green birds!

I stood in awe and watched them until the grocery bags started to slip out of my arms. I think it was then that I realized Austin had a big, beautiful problem with birds. They may look tropical, but they aren’t (Credit: Moonshine Images)

These birds are called monk parakeets and, though they seem to be everywhere now, they are not native to Austin at all. The first group of monk parakeets escaped from an RV park near a downtown YMCA sometime in the early 1970s. Because they were wild birds imported from their native habitat in South America (particularly Argentina), they were able to start a wild population here in Austin, where captive species would not have been able to survive.

Due to the fact that their native climate in South America was temperate low-land (not tropical, as I had wrongly assumed because of their bright, romantic coloring), monk parakeets can endure the colder winter season with greater success than other members of the parrot family. In this way, they survived, steadily, but slowly and in small numbers. This continued for decades, until the boom of cell phone towers at the turn of the millennium.

Unlike, say, grackles–which build their nests in the branches of trees–monk parakeets prefer to nest on tall wooden or metal structures that mimic the emergent trees of their native landscape. They like tall structures with clear vantage points and long horizons. Cell phone towers suit them perfectly, as do electric transmission boxes or, here in Austin, the towering light posts of UT’s Intramural Fields off 51st Street.

Janet Reed, a monk parakeet expert who followed her love of the birds all the way to a Ph.D, has studied the birds at the Intramural Fields with scientific and meticulous interest over the past year, as the fields were renovated last October. With the renovation came the demolition of the old light posts the birds had called home for so many years. Three hundred monk parakeets have now been displaced and forced to relocate their nests.

“The loss of the field lights is huge,” said Reed when I sat down with her to discuss the birds. “Monk parakeets nest year-round. Most other species do not. In human terms, it would be like a hurricane sweeping in and washing away your home.”

Rebuilding, One Nest at a Time

A photo posted by Patrick Larson Photography (@patricklarsonphotography) on Dec 13, 2015 at 1:52pm PST

But the renovation is understandable, given that the fields had not been touched in over 30 years and were badly in need of repair. The looming question now, for Reed and others who follow the monk parakeets, is how and where these beautiful birds will begin to rebuild their nests. Reed suspects they will gravitate toward electrical and cell phone towers, as they have done in Dallas and Houston. They will use young green wood, supple enough to weave, and build their nests stacked tightly together, almost like a block of bird duplexes. Up to 30 mated pairs of birds can live in one group of nests.

“February is pairing month,” says Reed. Monk parakeets are monogamous, and this time of year always brings a flurry of nest-building. “They’re getting ready,” she says, sounding hopeful. Her enthusiasm for the birds is infectious.

Where to Experience Austin’s Monk Parakeets

Wherever and however they begin to rebuild, Reed knows the birds will continue to be a source of joy to the people of Austin, and to whomever has the pleasure of seeing them around town. “They are such fun to watch,” she says. “They bring joy to people.”

To see Austin’s monk parakeets, she recommends the Central Market on North Lamar Boulevard at 38th Street, and the Starbuck’s on Guadalupe at 38th Street.

To learn more about the birds, check out this insightful piece by Peter English (on page four) or visit the fantastic Facebook group, The Monk Parakeets of Austin, Texas, which Janet Reed created and to which she regularly contributes wonderful updates on the status of the monk parakeet population in Austin.

Where is your favorite place in Austin to see monk parakeets?

Molly Morrow is a writer based in Austin, Texas, who loves birds very, very much. You can find more of her writing here.

I was at Zilker last Saturday and there was a group of about 15 or 20 right on the ground in the park! I was so confused and had no idea they were sort of native to Austin. Thanks for the article – great read!

They regularly visit the grounds of the French Legation Museum.

Another great spot to stroll and/or consistently see the Parakeets is at Mueller Lake park! They haven’t really built nests there that I’ve seen, but they’ll often chill in the larger trees around the park, and they’re always a delight to see.

I think there is a nest on a telephone pole at the corner of Airport and Wilshire Blvd. near the tennis courts. Saw some this morning! They always make my dat.

Lovely piece! You can almost always catch them on the trail around Lady Bird Lake, near the 5.25-mile marker on the east side. And there’s a nest in the tower by Counter Cafe on E. 6th; you can watch them from the outside patio. I appreciate this article because, while I knew the IM fields were being renovated, I hadn’t thought about the birds…and that explains why I’ve seen them so much more around my eastside neighborhood.

I saw a nest up hight at the entrance to the Mueller H-E-B with several pairs, staying warm out of the rain on Wednesday.

Well The parrots have long had nests beyond those at the intramural fields! My favorite place to watch them is at my bird feeder in my back yard in Windsor Park! Annd yes, they keep trying to form a colony under that huge awning in front of the HEB… I think they’ve been trying to discourage it.. .but not sure how, as there’s perfect ledge up there – maybe there’s no easy way to attach their nesting structure. They are incredible architects with sticks!! It’s great fun watching the mom’s coaching their little ones when they bring them to the feeder. I’m sure they do take away from the native birds, but they are already under so much pressure from starlings, grackles and pigeons anyway. Some day, that may be all we have. I have one feeder only for the small birds, and one the parrots, jays and such can use. The grackles can’t us either, but they follow the parrots around and get their leavings… the grackles do imitate the parrots calls… altogether a noisy raucous bunch that’s most amusing for my 85 year old Dad to watch too!

I was at Zilker today and there was a group of about 20 right next to the playground. My kids were asking me all about them…thanks for this story!

Near the CVS at Berkman. theres a huge nest on the phone lines. Next to the school.

The light poles at ‘The Gables Plaza’ are filled with nests at this moment!

Now seeing a group in Manor

Colony on Wheless lane in between Berkman and Northampton and another at the UT intramural fields off of Lamar and 51st.

I keep seeing a small group of about 6 at HEB plus in Round Rock on 79. They make me smile and I’ve got a few pictures.

I saw them today too Yvonne!

There is a flock of 30-40 nesting in the electrical substation at Northhampton and Wheless in Windsor Park. Our house backs up to easement and there is a constant back and forth from our trees to their nests to get new sticks. Love watching them! Unfortunately witnessed one dive bombed on a power line by a hawk the other day. It went to the ground and the hawk followed to finish the job. But I guess that’s just nature in action.

I saw one today near Riverside and Pleasant Valley! So beautiful 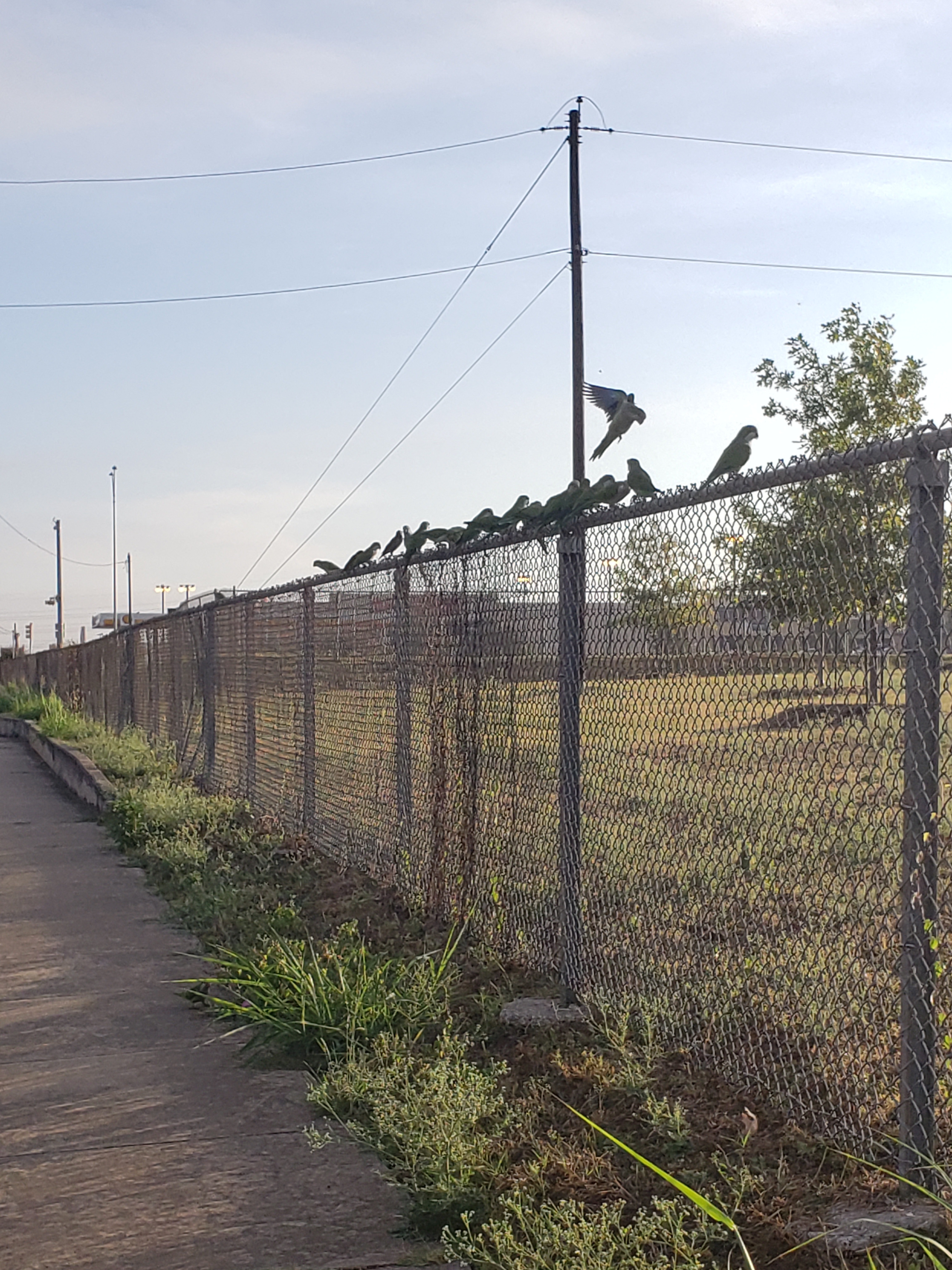 How cool! Thank you for sharing the photo.

I have a Quaker I have had for 20 years. I want a couple of Quakers to keep her company.

Is it possible to caught a pair of Quakers seen out in the colonies? If yes, how?. I was thinking about put food in a bird cage, then when it flies in rig the cage door to close.