What do Michael Caine, Clint Eastwood and Leatherface have in common? They’ve all wandered into an old general store 23 miles outside of Austin, called Cele Store.

This location has been the backdrop for several movies, including Secondhand Lions, A Perfect World and Texas Chainsaw Massacre I, II and III.

So if you’re into Hollywood, horror and/or smoking hot BBQ, you might want to buckle up and drive east to Manor, TX. The two lane country road meanders through picturesque farmland. If you’re not careful, you may miss the dilapidated structure that looks like a place history forgot to demolish. The warped, ruffled and rusty tin roof doesn’t hide its age, nor does the weathered and beaten gray wood siding.

The double screen doors look like something out of a spaghetti western, and they screech and squeal with movement, as if tired by a century of use. Once your boots scoot past the screen door, say good riddance to the 21st century and hello to bygone times and a delicious meal!

The space is dusted with authenticity, literally. Relics inside include a decades-old jukebox, and a row of metal high chairs perched behind a display of hardware from previous generations. A set of chainsaws and mounted heads of ram and deer line the walls. A mixture of wooden and metal chairs surround tables covered in plastic table cloths, and a long wooden bar offers a place to rest your present-day concerns. The structure was originally built in 1891. Since 1951, it’s been owned by the same family, who built a BBQ pit that churns out delicious ribs, brisket and sausage. This pit cranks out a taste that’s a carnivore’s dream! The staff members at Cele Store pride themselves on using only salt and pepper to dress up their meats. As their website states, “The secret to our great tasting BBQ is our pit…’seasoned’ over the years. No pit cooks quite like our brick pit!”

What you see is what you get, and the gettin’ is lip-smacking, finger-licking good. Succulent meat is delivered to tables as though it were a gift, wrapped in butcher paper.

You won’t find glassware (other than beer bottles) and the dishware is low maintenance, plastic. Don’t expect a menu, either. They like to keep things simple. In addition to meat and tangy, homemade BBQ sauces, you can order pickles, onions and cheddar cheese. Because they don’t offer traditional sides, you’re welcome to bring your own. The table next to mine had bowls filled with potato salad and green beans, along with a birthday cake. And while Cele Store does serve bottles of beer and soda in cans, if you want hard liquor or wine, you’re welcome to bring them, too.

Another 21st century item you won’t find here: credit cards. Leave them at home because this old-fashioned establishment only accepts two forms of payment: cash and check.

Step Back in Time 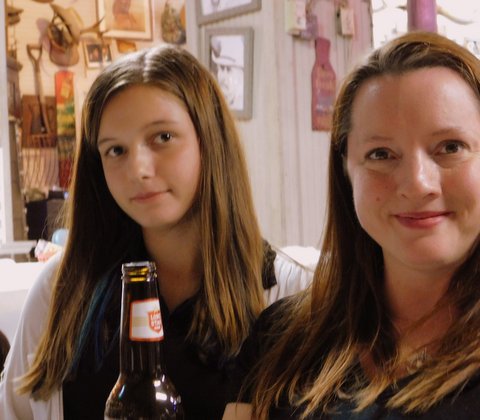 Cele Store with my daughter

On select Friday nights, you’ll be treated to live music. When the house band began playing Gordon Lightfoot’s “Sundown,” my mind waltzed back to a time when my toughest decision of the day was one pigtail or two; the only distance between me and my parents was a hallway; and calloused palms were proof I had mastered the monkey bars.

It’s nearly impossible to go into Cele Store and not be transported. But, rest assured, whichever era you envision during your visit, the scent of char and charm are sure to follow.

Which location in the Austin area transports you to another time?

It’s all true. But keep in mind that open hours are very limited! Verify before you go.

Appreciate you mentioning this. Just like the establishment, their operating hours are quirky…and if you’re like me, you’ll love them because of. Be sure to check their website or call before going!

What a surprise! This ragged out shack is a bbq joint? It’s all that and more. Wonderful BBQ with a bar and amazing ambiance. The history adds to the fun!!