The list of must-try eateries in east Austin is overwhelming. Don’t expect reading about Artessano to make things easier for you. Artessano’s food trailer, located on East Sixth Street, has been delighting customers with authentic Colombian food for years. I met with owner, Carlos Quitian, and his nephew, Andres Amaya, to hear how they bring Colombian culture to Austin.

When Quitian moved to Austin from Colombia, he wasn’t planning on getting into the food business. But when he couldn’t find the authentic Colombian food he craved, he decided to scratch his own itch and share the tastes of his homeland with Austin. 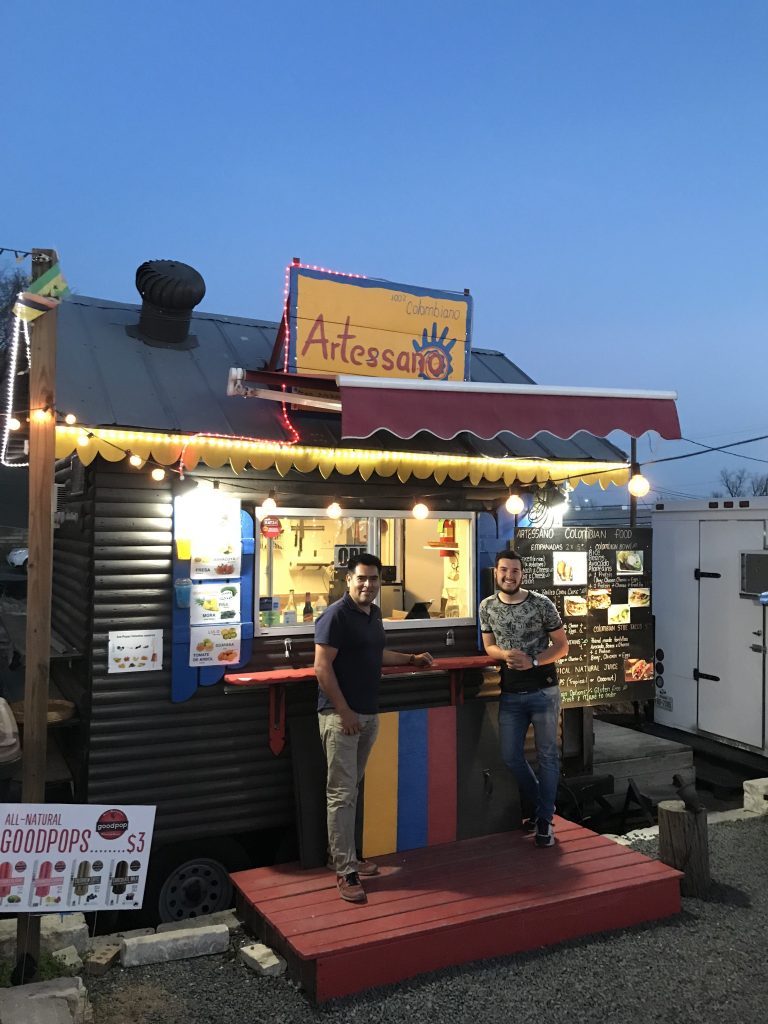 Quitian has big plans for Pangea Lounge, including live bands, DJs, and yoga classes. While I was there, Latin music pumped through speakers, setting the stage for learning about Artessano’s Colombian food.

More Than a Name

The name Artessano, which translates to “craftsman” in English, is a concept that guides Quitian’s food creation. Artessano takes on even more meaning, considering the word is a combination of “art” and “sano,” which translates to “healthy.” Everything here is handmade, right down to the butchering of the meat. Arepa and empanadas at Artessano

“We think of cooking as an art,” Quitian told me. I saw what he meant when the colorful Colombian bowl arrived. The dish was served with rice, beans, avocado, a plantain, and a protein. The presentation was beautiful and everything tasted as fresh as I expected.

Amaya, who moved from Colombia a year ago to join his uncle in the business, explained, “Everything we make has an authentic taste. There are no preservatives and it’s gluten-free.”

My personal favorites were the handmade empanadas. The first one I tasted was filled with flavorful beef and potatoes, wrapped in a flaky shell. The Hawaiian empanada was filled with gooey cheese and pineapple. The cheese and sweetness played off the other to startling effect. Other empanada options include chicken and rice, guava and cheese, and spinach and cheese.

The arepa rellana was massive! And for $6.50, it was quite the bargain. The outside that holds it all together—a grilled corn cake cooked with cheese—could be a dish on its own. Inside were beans, avocado, cheese, and a choice of protein. The most popular is beef, and for good reason. It was a messy meal of goodness! The menu is filled with great choices. Next time, I need to try the arepas with chorizo, which is imported from Colombia. And here’s where Quitian made an admission of sorts, regarding the “Colombian Style Tacos” listed on the menu. “We don’t do tacos in Colombia,” he told me. “But here in Austin, people love tacos, so we wanted to offer our take on them.”

Okay, so not everything is authentic Colombian. I think all of us taco lovers can agree to give Artessano a pass on that!

Don’t forget to try the tropical fruit juices if you want to end your visit on a sweet note. It’s no surprise, but these fruits are also shipped from Colombia for your sipping pleasure.

Feeding the food truck-lovers of Austin is an accomplishment in itself, but Quitian has an even greater mission in mind. It’s called “Ralaismo Magico.” This is a concept Colombians hold dear, and that Quitian wants to share. It describes their culture with good food and great people. “I want to show people the positive things about Colombia,” he said.

With food and atmosphere like this, and a focus on authenticity, Quitian is doing just that. Mission accomplished.

Have you tried food from Pangea Lounge in east Austin?