Artifacts from The Beer Museum in Austin (Credit: Kim Giles)

For some, the ideal evening beverage is a 12 oz. stout. For others, it’s an IPA. And for others still, it’s a smooth pale ale. But for Matt Benavidez, Virginia Benavidez and Cameron Paxton, it depends on the night, and more times than not, it’s all the above.

Beer is a way of life for this group of friends. It always has been and always will be. So it’s no surprise they’re behind Austin’s first Beer Museum.

And while you might not have heard of the museum just yet, that’s okay. Don’t be fooled by its infancy. In reality, it’s a project that has been brewing for quite some time.

Before the (Beer) Boom 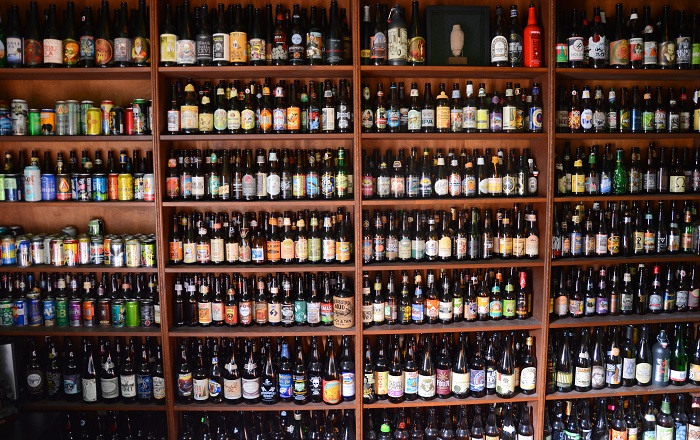 The Beer Museums’ collection as of one year ago (Credit: Kim Giles)

An Austinite born and raised, Virginia Benavidez attributes her knowledge of local offerings to her parents, both supporters of Austin’s craft brew scene. But it wasn’t until she began purchasing beer for herself that she developed a love for local, national and international brews alike.

While studying film at The University of Texas, she started collecting beer bottles and cans as the result of a self-imposed challenge. Simply put, she was on a mission to try “every packaged beer Specs had to offer.” As it turned out, the best way to keep tabs on what she had and hadn’t tried was to collect, and later display, the empty bottles around her room.

By the time she met her now-husband, Matt Benavidez, she had acquired a varied and quite impressive collection of cans and bottles. And according to the pair, Matt hopped in on the fun shortly after.

“The first beer was Black Sheep Brewery’s Monty Python’s Holy Grail,” he laughed, “…and I actually haven’t tried it since.”

For the remainder of their senior year at UT, the pair tasted as many new beers as they could find. Further expanding Virginia’s already sizable collection, it wasn’t long before they realized they were running out of space.

Received a cool old can collection last night! If anybody wants to give any collections a good home, email us! Austinbeermuseum@gmail.com

It wasn’t until the couple met Cameron Paxton in 2010 that the idea behind a museum originated. While the trio first came together to form a band, Pagelings, plans shifted as their friendship and mutual love of beer continued to grow. It was only a matter of time before weekly band practices turned into business meetings.

In 2013, with nearly 1,000 unique bottles and cans from local breweries and beyond, the concept for The Beer Museum was born.

What to Expect From The Beer Museum A sneak peek into cool and unusual beers at The Beer Museum (Credit: Kim Giles)

With a variety of ancient artifacts, educational information and a few historical images, The Beer Museum is like any other museum–except that it’s on wheels.

The mobile exhibition includes nearly 50 original documents and artifacts (one dates back to 3,000 BC!) and two infographics. While one graphic describes the history of beer, the other walks guests through the beer-making process. As a whole, it can takes visitors up to 45 minutes to move through the entire display.

The setup is designed to meet visitors wherever they are along their beer journey. Whether they’re experienced beer drinkers or still debating between hoppy and malty, The Beer Museum offers interesting and compelling information that’s relevant to them.

“We want to appeal to anyone and everyone who’s interested in beer,” said Virginia Benavidez. “We offer a broad sense of understanding beer as an entire industry, as well as an understanding of beer at a local level.”

Though there’s a lot of information about beer history available, the trio is determined to strike a balance between being informative, yet approachable. It seems there’s a new brewery popping up on every corner these days. And though Boulder and Portland receive a lot of praise for their craft brews, Austin isn’t too far behind, receiving several awards over the past few years.

“The truth is, the craft brew scene [in Texas] is growing,” said Paxton, “and Austin is at the forefront.”

Paxton and his fellow museum founders have watched our city’s craft beer culture develop over the past few years. They hope The Beer Museum can foster continued growth.

“Austin is where [The Beer Museum] started for us,” said Matt Benavidez, “and the goal is to be seen as a partner in the industry, not a competitor.” The trio hopes to continue to develop relationships with breweries and promote the local scene.

Big step forward for Texas beer. Proud of these breweries that fought the good fight. https://t.co/xQ1aX8sgQj

Currently operating as a mobile museum, The Beer Museum partners with local breweries and organizations to educate and inform Austinites about local beer culture and show off its collection.

The trio hopes to open a fixed location in the future and has already started exploring where exactly it might be. The site will incorporate all aspects of the current museum, plus a few key upgrades, including a sampling tour of forgotten brews and a bar that will spotlight local favorites.

The Beer Museum is educational, unpretentious and welcoming to all who are interested. Its philosophy: keep it small, simple, smart and silly (KISSSS, if you will).

There’s a story for every beer out there. From a beer-loving, IPA drinker to you, cheers. To learn more, visit The Beer Museum’s website.

Have you been to The Beer Museum yet?

Sommer Brugal is a freelance writer in Austin, Texas. She loves all things food, coffee and music, and is always looking for new places to try around town.